It's not yet over in Gelang Patah

A friend who lives in TUTA (Taman Ungku Tun Aminah), Skudai called me last night to say that I was being too negative with my Prediction of GE13 outcome

"You were too quick to dismiss Ghani's chances of defeating Kit Siang and underestimated the Chinese ability to make the right choice," she said in reference to my prediction that DAP supremo Lim Kit Siang will defeat Johor outgoing Menteri Besar Datuk Abdul Ghani Othman in the Chinese-majority Gelang Patah.

Well, I don't think I was being too quick with my prediction now that polling is just two days away.

After all, the DAP ceramah at Sutera Mall, Skudai is indeed big. Well, maybe DAP exaggerated the number by saying it is up to 70,000 because I have been to the place and I'm certain that it can only accommodate a maximum of 30,000 people. But, still, it was a huge crowd.

"Okay. Let's be reasonable and say that 50,000 people were at the DAP ceramah, which is still an excessively huge number. How many of them do you think are voters from Gelang Patah who will vote for DAP?" asked my friend.

The following is my friend's line of argument -

First of all, Sutera Mall is located in the middle of Skudai, which is the stronghold of DAP in southern Johor. It is within less than an hour drive from all point of directions covering other nearby parliamentary constituencies of Johor Baru, Pulai, Tebrau, Pasir Gudang, Kulai, Pontian and Tanjong Piai.

Considering the ceramah at Sutera Mall features the biggest guns of Pakatan, their members and supporters, especially from DAP (the crowd is overwhelmingly Chinese) from the other constituencies must had converged there too.

Due to that, most likely, one, third of the overly estimated 50,000 crowd are not from Gelang Patah. That means, less than 35,000 are locals of Gelang Patah.

Of the less than 35,000, how many are DAP supporters who can vote in Gelang Patah?

Do consider those who come to live and work in the constituency or Singapore and will go back to their hometown to vote. Also, let's take out the teenagers and children brought along by their DAP supporting parents. Those combined with the curious onlookers, security personnel, members of the press, kaypochi Singaporeans shopping at the mall, etc should make up about 20 per cent of the 35,000.

That left the possibility of less than 28,000 voting DAP members of Gelang Patah at the ceramah. Bear in mind that this figure is derived from an original number favorable to DAP.

Based on the fact that there are slightly over 106,000 voters in Gelang Patah, DAP need to get about 25,000 more people not at the ceramah to vote for Kit Siang for him to win.

Now, almost all the hardcore supporters of DAP in Gelang Patah must be at the ceramah. Therefore the bulk of the 25,000 extra voters they need to get must be from the fence sitters section which BN are also working to win over to its side.

So, according to my friend, the battle to preserve Malaysians' unity by Ghani and his people in Gelang Patah is still not yet over. There is still hope, she said.

Well, maybe she is right.

Ghani is after all, still going all out with his election rounds. There was no sign of him giving up yet.

Yesterday, he took the early morning bus across the Causeway along with Malaysian workers working in Singapore. Here is the story - 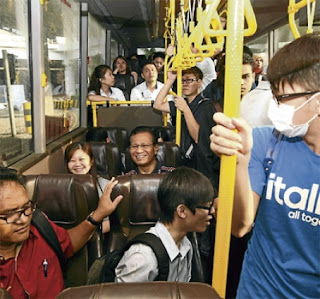 His schedule only ended past midnight with a gathering with Hindraf leaders at Taman Teratai. This morning at 6.30am, the 67-year-old leader was up again outside the Giant hypermarket in Bukit Indah to meet Malaysians working in Singapore who wait for their bus there. His schedule today as it was through out the campaigning period was packed.

How close the outcome of the race to the line is going to be? My friend believes it will be razor thin in favor of Ghani. I would very much want to believe that too.
Posted by Annie at 10:26