End of the road for Mat Sabu

On Sunday, Pas deputy president Muhammad Sabu or better known as Mat Sabu declared in Tapah, Perak that Pakatan will gather "millions" at Dataran Merdeka to protest against the alleged electoral fraud committed by BN and the Election Commission.

“Millions will flood Kuala Lumpur if our demands are not met soon. If the EC does not resign, we will continue holding gatherings until the Najib government is toppled,” he said, as reported by pro Pakatan Malaysian Insider.

He lost the contest for the Kedah's Pendang parliamentary seat in GE13 and now raging for things in this country to turn into something like the Arab Spring.

Mat Sabu knows that with him losing in the election, his position as Pas deputy president is as good as gone.

It will also marks the end of his political career.

Now, the only way Mat Sabu may salvage the situation for himself is to instigate Pakatan people into creating such a massive public disturbance which in his own word will topple the rightfully elected government.

Mat Sabu needs the disturbance to immediately happen as the longer it has to wait, the faster his relevance will fade.

I believe his rivals within Pas are already preparing for the kill.

Another person who wants a Malaysian version of the Arab Spring is DS Anwar Ibrahim, the de facto opposition leader.

He can't wait for another five years to topple BN in an election which he may anyway lose again.

He will be past 70 years old at that time and many other younger Pakatan leaders will move up the ranks and possibly push him to the sideline.

But Anwar is a bit smarter than Mat Sabu.

Yesterday, it was reported that he denied Pakatan is going to hold the massive rally as announced by Mat Sabu in Tapah.

Anwar said he doesn't want to call for the massive rally in downtown KL for the time being.

It's not that he doesn't want it to happen, but it was because he knows he will not be able to muster the "millions" that Mat Sabu was rambling about.

The numbers at Pakatan rallies against the alleged electoral fraud is clearly going down.

People, including those of Pakatan are getting tired. How much of these electoral fraud crap could they swallow anyway?

If Anwar calls for the "millions" rally at Dataran Merdeka now and just a few thousands turned up, what will be his future then?

Worse still, if those who turned up consists mostly members of only a particular race.

Anwar knows that he needs to rebuilt the Pakatan's momentum once again and this will take quite a bit of time.

It's just too bad for Mat Sabu. No "millions" people rally to save his political career now. And not much loves for him soon. 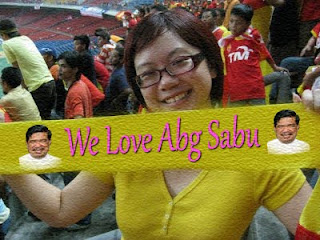