Chuah Bee Kim is a long serving Johor-based NST journalist who is also a blogger. As a journalist, she specializes in covering community and environmental issues.

She is not a political writer and I believe is an apolitical person all her life.
Her blog was also non-political. That was until the campaign period for this general election started.

This is how she sees her Menteri Besar of 18 years -


Ghani, a gentle yet resilient politician


I HAVE never covered so many events attended by Datuk Abdul Ghani Othman in the past 14 years of my career as a journalist based in this state as I did these past several days.

It all started on April 16, when Johor Barisan Nasional announced its line-up for the May 5 general election. Now, I cover the functions of the outgoing Menteri Besar almost daily, sometimes twice in a day.
This experience has given me a chance to get to know him better.
In the past, my knowledge of Ghani was rather limited. It merely revolved around him being the Johor Menteri Besar for 18 years and him being instrumental in the robust growth of the Iskandar Malaysia development region.
When my colleague Syed Umar Ariff was in Johor, he wrote (two years ago) that Ghani bears a resemblance to Hollywood action star, Steven Seagal.
I could not see that resemblance from which ever angle I was looking at Ghani.
“Which feature or part of Ghani resembled Seagal?” I wondered after reading that article by Syed Umar.
But now, as I see Ghani almost on a daily basis, I do see the resemblance.
Ghani, born 66 years ago in Sungai Mas, Ledang, is not your typical politician.
My fellow journalists had described him as media-shy, which to a certain extent is true.
But reading about a man’s personality, and actually meeting him, are two different things.
His mannerism, unassuming disposition and soft-spoken nature made the comparison to Seagal seem appropriate.
Ghani also practises Aikido, a form of Japanese martial arts which Seagal is a master of.
This is how Ghani is perceived, which by right makes him the silent, lethal type, but not in a bad way. At least he is the type whose “actions speak louder than his words”.
A couple of days ago, I was at an assignment where Ghani visited an old Chinese temple called the Po Seng Tai Ti temple in Skudai.
He was there with his wife, Prof Datin Paduka Dr Jamilah Ariffin, their son Mohammad Jamil Hilmi and daughter-in-law Daryl Maira Orilaza Abdullah.
I was deeply moved when I saw a frail-looking senior citizen, probably in his 70s, squeezing his way through the crowd to shake Ghani’s hand.
I have seen the public crowding around politicians before, but the enthusiasm and sincerity displayed by those at the function were different.
Another thing I noticed about Ghani is that he never gives out ang pow or gifts to win the people’s support. He gives his assurance with sincerity.
The way the villagers greeted Ghani and his family with such warmth and enthusiasm spoke volumes of what the man has done for his community, regardless of race and religion.
In Ghani’s eyes, all of us are Malaysians and not Malays, Chinese, Indians or of other races. He believes in moderation and has been dubbed a classic Malay gentleman even by his detractors.
He is always cool and collected, and probably isn’t one who throws his weight around at the workplace either.
Ghani was formerly a senator (1984 to 1986), the Deputy Minister for Energy, Telecommunication and Post (1987 to 1990) as well as Deputy Minister of Finance (1990 to 1993).
He received his primary and secondary education at the Tangkak Boys School and Muar High School, respectively.
He was a recipient of the Colombo Plan scholarship which allowed him to further his studies at Latrobe University in Melbourne, Australia. He graduated with a Bachelor’s degree in Economics (Hons).
The battle for Gelang Patah, which is a Chinese-majority constituency, is one of the most watched contests in this general election.
It is not just a battle between DAP stalwart Lim Kit Siang and Ghani, but more importantly a battle that determines whether the voters of Gelang Patah, particularly the Chinese community there, are capable of voting a representative based on the candidate’s track record and integrity rather than his ethnic background. 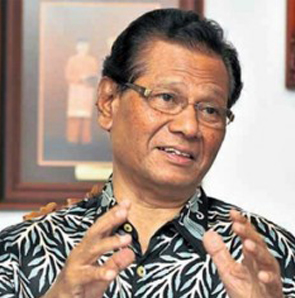 I don't think Miss Chuah was forced by her pro-establishment NST employer to write the above article. There was too much sincerity in the way she wrote it.

You may read Miss Chuah's other articles at
A Green Bee In The Rain 雨中的绿蜂
Posted by Annie at 09:57