Nothing much to do at the office today. Apparently, everyone seems to like my job and were doing it for me.

I decided not to kick up a fuss and just let it be. After all, I don't want to get involve in any stupid petty office politics.

So, I went home early for a quiet evening. Had dinner of rice and chicken and then watched my favorite cartoon at the moment, Finn and Jake. 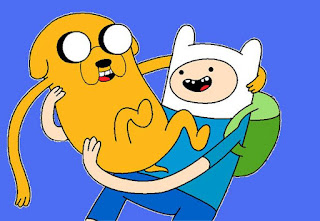 Then I remembered this comment in my earlier posting

KUALA LUMPUR: Pro-Pakatan Rakyat groups have vowed to overthrow the Barisan Nasional government this year through a massive street rally.

Speakers at a forum held yesterday unanimously agreed that waiting for five years until the next general election was too long, and vowed to overthrow BN this year through “force”.

The street rally is rumoured to be as early as May 17 or 18 to overthrow BN and capture Putrajaya.

“We will take to the streets and take over Putrajaya. If we really want to overthrow them, there is no other way. Democracy does not work,” Haris Ibrahim from ABU (Anything But Umno) told the 1,500-strong crowd here.

“The people cannot wait anymore. We don’t want to wait another five years. We will take the streets,” he added


Thanks Anon for bringing that to my attention.

I believe he/she had lifted that bit of story from the pro-Pakatan Free Malaysia Today.

That story actually reminded me of how I felt when DAP's Lim Kit Siang was announced by DS Anwar Ibrahim as the Pakatan candidate for the Gelang Patah seat.

I was telling myself at that time that there goes the neighborhood, the DAP people are coming down to Johor and push through their agenda by fanning the Chinese racial sentiments.

True enough, that was how they managed to get 97 per cent of the over 56,000 Chinese voters in Gelang Patah to vote against their moderate yet efficient Malay MB of 18 years, Datuk Abdul Ghani Othman.

Ghani had pleaded to his "old friends" in Gelang Patah to safeguard the "Johor Way" which put moderation above all else by rejecting the DAP aggressive racialist tactics, but to no avail.

Racism apparently does produces results as proven in Gelang Patah.

That's when I decided that racism should be fought with racism.

As you may noticed, these past week, I was fashioning myself to be a Malay racist to counter that DAP's racism.

Now I realized that I had been outmaneuvered again.

Racism is apparently so yesterday. It's now not good enough for these Pakatan gang.

They have now transformed themselves from racists to anarchists.

Now, as reported above, they are saying that they will topple the government by force before the year ends.

Democracy is now garbage to them. They just can't accept that despite their gains and almost total support from the Chinese community in GE13, BN still rules the country.

Anwar is already on the road accusing BN of cheating to win the GE13.

His rallies are reportedly drawing tens of thousands. No proper evidence of electoral fraud has been presented yet his followers are blindly hanging on to his every words.

The authorities had not done anything so far, probably hoping for the whole nonsense to burn out on its own without any untoward incident.

Probably, due to the lack of drama, Anwar minions are now going extreme to push the authorities' hands.

Haris Ibrahim who is suppose to be a lawyer, thus by right should be a law abiding citizen is now advocating force on the streets as a mean to take over Putrajaya.

I am not sure how this whole madness will end.

But I am quite sure that the right thinking Malaysians, including those who voted Pakatan less than a fortnight ago will realize how crazy and power hungry those people are now.

My rather pathetic attempts at being a racist is as threatening as a cartoon monster compared to the Pakatan's anarchist maneuvering .
Posted by Annie at 22:49