(Note: Updates at the bottom of the page)

It was not a political function. There was no party banners, flags or other paraphernalia. There were about 5,000 people at the function.

The function, held at the open space near the Sutera Mall, Skudai where mammoth DAP rallies were held the previous nights was to honor Tan Ah Eng, the former Gelang Patah member of parliament.

Tan is the Wanita MCA deputy chief and Johor Wanita MCA chief. She has been the Gelang Patah MP for nine years. 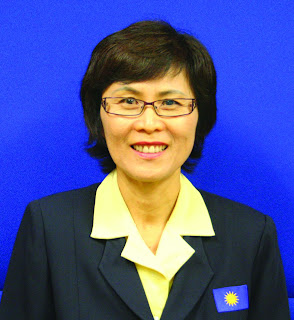 She is now bedridden and suffering from spinal cancer.

Tan, while serving as an MP had worked closely with the Chinese Gelang Patah NGOs in setting up community centers such as complaints bureau, dialysis centers and free traditional medical services programs.

It is well known among members of the Chinese NGOs that Tan worked closely with Ghani in getting State government funds to assist their activities and programs.

She was represented at the function by her husband and children.

Ghani, in his speech thanked Tan on behalf of the Johor government for her services.

Describing Tan as "an old friend", he said it was a pleasure and an honor being able to serve the people with a sincere person like Tan.

Ghani asked everyone present to pray for Tan and her family.

Earlier, a recorded message by Tan was shown on the big screen set up in front of the audience.

They were many who shed tears as the ailing former Gelang Patah MP delivered her message from her sickbed. I was among them.

I'm not going to write what her message to the people of Gelang Patah here as I don't want to be accused of manipulating what she said.

If there is a video of her message being uploaded in You Tube later on, I will post it here.