A Chinese lady and her occasionally Malay racist daughter

I had dinner with my mother last night.

It was the first time I met her ever since I went to JB a month ago.

My father was not around. He was busy as usual and could not joined us.

We met up at the shopping mall near where my parents stay in Subang Jaya.

My mother had salads while I had a cheese burger.

She is the healthy conscious type, while I am just the type who considers food merely as fuel to keep on going. 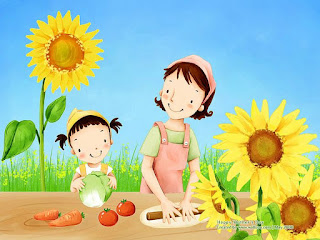 My mother actually looks much younger than her age and a lot of people had mistaken her as my elder sister whenever we hanged out together.

But, the dinner last night was a bit tense.....ok, it was actually QUITE tense.

I am not going into details because what we talked about was private.

Suffice to say that we did not agree with a lot of things over the outcome of GE13.

My mother is a Chinese and she supports DAP as she believes the party and its allies could improve the country from what it is now.

As for me, I am half Chinese half Malay who supports BN and thinks that DAP is promoting chauvinism by exploiting Chinese sentiments while its allies are bigger crooks than the biggest of crooks in BN.

However, we managed to talk without raising our voice.

My mother told me that she is worried that I may get arrested for my postings in this blog these past few days.

I told her not to worry. My blog is just a new insignificant anonymous blog with very small readership. I don't think the authorities want to shut me off just because I'm venting a bit in my little blog.

After all, Malaysia is still under BN, so I guess there is still freedom of expression.

Anyway, if the authorities really want to crackdown on racialist publications, then they would have to first close down all the Chinese newspapers which had been harping on racial sentiments these past years in their effort to create the Chinese tsunami.

I know, there's that Utusan newspaper labeled by DAP and its allies as a Malay extremist publication. Now, how many Chinese newspapers are there in this country? None of them ever promoted Chinese extremist views?

Also, there are also all those people who posted all sorts of racial stuff in their Facebook and twitter. The authorities need to catch them too.

And as we are at it, why not catch all those politicians who instigate members of a certain community by telling them that they are 2nd class citizen so that they hate the "corrupted" Malay-led BN government.

Well, never mind, I think we all know that such thing will never happen.

At the end of our dinner, my mother held my hand.

It soothed my anger a lot.

She seldom offers such gesture now that I'm an adult.

And when she later on kissed me good night, I know that she still loves me....despite me now being occasionally a bit of a Malay racist.
Posted by Annie at 10:02