A Japanese dinner with a Chinese guy

Got a call earlier today from this guy who has been occasionally buying me dinner.

And as usual he asked me out after work.

I don't really feel like to layan him, but he was persistent, saying that he hasn't seen me for almost two months.

So, okay lah. After work I drove to a mall where he was to pick me up.

From there he took me to this nice Japanese restaurant not far from the mall.

He ordered all sorts of sushi stuff while I asked for a sukiyaki set. 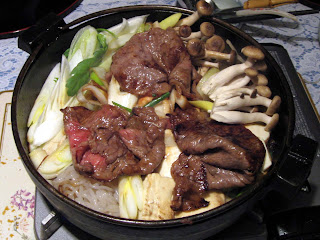 This guy is quite well off. A handsome single middle class Chinese guy living in an apartment I believe worth about RM1 million.

He even has a bottle of expensive sake kept at the restaurant.

And as usual, I let him do all the talking.

Of course the main topic of the night was the GE13. It is apparently still "hot".

He is a DAP supporter (all of them are these days), but he knows that I am, despite my Chinese looks is unfashionably partial to BN. So, I noticed that he tried very hard not to offend me.

He explained how DAP people actually meant well for the country and that they are not the enemies of the Malays. That they just want the country to be better managed and be cleansed from corruption.

He also expressed regret that almost all of the Umno moderate leaders were wiped out in GE13. He said it can't be helped as these good Umno leaders were placed at marginal seats with high percentage of Chinese voters who had made up their mind to reject BN.

He said it would be great if the good Umno people could unite with DAP people to rule the country.

"Honestly, we don't really like the Pas and PKR people, but we got no choice," he said, adding that he doesn't agree with the Black 505 campaign against the election results which was propagated by DS Anwar Ibrahim.

"It makes us all look like sore losers," he added.

At that moment I interjected and said something like this,

"Please tell your DAP friends not to tire themselves with all that Anwar's crap. Tell them to be patient.

"Anwar is using all of you for such nonsense because his time is running out. He needs to be a PM now as five years till the next general election, he will be totally irrelevant as new leaders will be emerging in Pakatan and they will push him to the side.

"He will be a Pakatan's liability at the next general election. Bear in mind that the  majority of the rakyat, especially the fence sitters are getting fed-up with his antics.

"You all Chinese, don't have to be sucked in into all those nonsense. All your community need to do is to keep the current momentum and vote in block for DAP and its allies like what you all did in GE13.

"I am quite sure Pakatan will take over the federal government in the next general election if you all managed to do that. There will be no way the Malays are able to unite to counter your Chinese block. They are too weak and stupid to do that.

"And if the Chinese community can further keep themselves together that way for another general election 10 years from now, I can guarantee you that they will be able to take over the running of the country from the useless Malays."

He was in turn quiet as I said all that.

He is a smart guy and he knows that I am telling the truth.

Later before he dropped me off at my car at the mall, he reached out and hold my hand for a few seconds.

I don't know why, but I just let him did that.

Tomorrow, I need to wake up and remind myself again that I'm a Malay racist. I must not let that Chinese guy touch me again. I guess I need to be reminded of that all the time.

Really, I'm quite useless as a racist.

Okay, I need to sleep now.