The following is the Wesak Day message from DAP secretary-general Lim Guan Eng, who is also the Penang chief minister on May 23rd. Those in bold are his words while those in the normal font are my comments.

“Democracy gives power to the majority and respects the legitimate rights of the minority. Democracy does not give the minority to oppress the majority or else we will have the situation like the South Africa racist government practicing apartheid in repressing the majority black population.

Guan Eng and gang should not had scared the Malays in the rural areas by their very aggressive campaigning for Chinese votes. Their Pas allies who were supposed to secure the votes of those Malays suffered badly because of that. Gerrymandering doesn't really count here because Pakatan got the religious zealots Pas who were supposed to be more appealing than Umno among the rural Malays. As they usually do, people like Guan Eng will only complain if things do not go their way. Anyway, how come Pakatan lap pigs such as Ambiga never complain about the country's first past the post electoral system before the election?

“By not respecting the principle of “one-person, one-vote, one-value”, BN has created injustices in one case where one BN vote can be equivalent to nearly 10 PR votes. This travesty of justice was demonstrated in Putrajaya with only 17,000 voters won by BN as compared to Kapar with nearly 160,000 voters won by PR.

So, does that means the people of Kapar should have 10 parliament seats in their area. Who asked them to cramp themselves into that small urban ghetto anyway? I suggest for DAP members in Kapar to move to Putrajaya so that they will be better represented. Or maybe they should move to Limbang, Sarawak. How come Pas' Husam who contested in Putrajaya didn't complain about this before the election?

“As no other party had won more popular votes than BN since 1957, this contempt of democracy was only highlighted in the recent 2013 general elections when BN lost the popular vote for the first time in history. BN recorded only 47% of the popular vote to PR’s 51% but yet won 60% of the parliamentary seats to PR’s 40%. In effect there is a minority Federal government, minority Prime Minister and minority Home Minister ruling Malaysia.

Contempt of democracy? This system that we are using came from UK, not from Saudi Arabia or People's Republic of China or Singapore. It's as democratic as it originally can get. Ask your machais at the Bar Council to open up their constitutional law books and explain to you whether the system that we have is democratic or otherwise. You agreed to play by the rules and when you lose as according to that rule, you want to throw tantrum. Why so childish? If you want to change the electoral system, then the next time you want to have that stupid Bersih rally, make sure you include that in your demands instead of asking for craps such as the indelible ink.

“Despite PR winning the popular vote in the 2013 general elections, PR and DAP does not seek to overthrow the BN government. DAP and PR has always chosen a peaceful change of government in accordance with the Federal constitution.

Then what the hell are you all doing wearing blacks at all those rallies accusing without evidence that the election had been rigged. Why can't you all just lodge your complaints through the normal channels. And when all those anarchists were detained for openly calling for the people to use "force" by going to the street to topple the government, you all went all out to defend them.

The hypocrisy of it all is as displayed by Guan Eng's following paragraph...

“However the BN government does not behave like a minority government but an authoritarian government. The recent arrests of 3 anti-BN leaders, PAS’ Tamrin Ghafar, PKR’s Tian Chua and NGO Haris Ibrahim and confiscation of PR’s party organ of PKR’s Suara Keadilan, PAS’ Harakah and DAP’sRocket gives an eerie reminder of what had happened in Myanmar after the military rulers lost in the general elections.

Well Guan Eng, if that is not a hypocritical crap of the tallest order than I don't know what it is.

“In 1990 the democratic movement in Myanmar led by Nobel Peace Prize laureate Aung San Syu Kyi won the general elections with 80% of the seats but was not allowed to take power and the generals took over with a harsh military rule that violated basic human rights. The harsh crackdown in Malaysia now imposed by two hardliners who were newly appointed as the new Home Minister and Inspector General of Police is a timely reminder to prevent Malaysia descending down this perilous path. 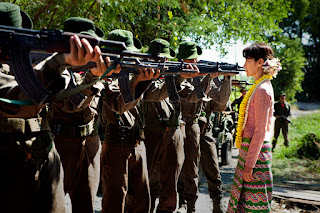 No, that's not Aung San Syu Kyi. That's Michelle Yeoh in the movie The Lady, portraying Aung San Syu Kyi. Remember how the rabid DAP cybertroopers attacked her after she declared her support for DS Najib Razak. Do Malaysians expect DAP and its allies to practice democracy after they come to power? Do they think those rabid DAP cybertroopers know the meaning of allowing dissenting views in a democratic country? I don't think so. You just look at the way Guan Eng treated the media which does not side with him and you would know that he is not the right man to talk about democratic principles. He even rigged his own party elections
RRR

“As we celebrate Wesak Day with full compassion for all, we must also say “No” to this latest attempt to stifle dissent the voices of conscience. Malaysians of all races and religions who voted for democracy, freedom, justice, truth and integrity must join together peacefully to prevent a new age of darkness. Malaysia must not by Myanmar 1990 revisited.”

Oh, only in the last paragraph did Guan Eng put the Wesak Day greeting. And a politicized one at that. It baffles me how the Chinese Buddhists could tolerate this obnoxious Guan Eng and his gang.

For more of this, you may read at Helen Ang's The Secret Life of Betty Bald
Posted by Annie at 17:51