These are really interesting,

Anwar hits back at


excerpts;
Speaking at a PKR event, Anwar said respect and decorum must be maintained when anyone expressed themselves. “We have worked very hard to get the Malay rulers to appreciate this new administration,” he said.

Anwar said he had met and would continue to meet the Malay rulers on his own volition to get rid of any perception that Pakatan Harapan was against the rulers or intended to ignore constitutional provisions on Malay rights, Bahasa Melayu and the position of Islam.
Anwar’s remarks were in response to an article in Kadir’s personal blog in which Kadir had brought up the cost of the upkeep of the Yang diPertuan Agong, and made pointed references to their special position.

Kadir in a blog post said that for 16 months to April this year, a total of RM256.9 million had been allocated to the Yang di-Pertuan Agong for purposes of accommodation, maintenance of residence and palace, personal items, aircraft and transportation, training and escort equipment, clothing and ceremonial items, gifts and souvenirs, overseas visits and salaries of palace staff.
Kadir, however, did not state the source of his information regarding federal spending on the royals.
According to the Treasury, the government only allocates RM13.5 million annually for the Agong.
Anwar also said issuing such disparaging remarks without giving the rulers the opportunity to clarify them is unfair.
Please click on this link to read Datuk Kadir's posting which irritates Anwar;

Constitution: The King and the Pauper

However, I think what really made Anwar angry was this picture which goes with the posting; 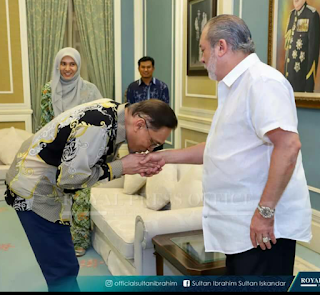 That really makes Anwar looks not so good amidst all that recent talks by PH supporters about turning the country into a republic.

Well, I guess I was right when I wrote


And I don't think this will ends here.

As I previously wrote, there seemed to be a groundswell building against the royals, especially among PH supporters following the AG appointment issue which made Anwar looked like a

For a while, I even thought that the royals were in for another crisis similar to the one resulted with the

the Constitution of Malaysia


That was until Anwar's statement directed at Datuk Kadir's blog posting last night.

I guess Anwar really meant it that he would defend the royals....or at least defend himself from being portrayed as trying to be too cosy with the royals.

Reading back that statement by Anwar, I can't help but to notice that he sounds quite a bit like an Umno leader. Especially this part;

Anwar said he had met and would continue to meet the Malay rulers on his own volition to get rid of any perception that Pakatan Harapan was against the rulers or intended to ignore constitutional provisions on Malay rights, Bahasa Melayu and the position of Islam.

Anyway, on another front, my observation of the effort to revive Umno over the past few days seemed to suggest that Anwar's former protege Zahid is still the front runner to win the party's president post.

The only possible serious contender for the post at the moment seems to be the 81 years old Tengku Razaleigh Hamzah.

Despite increasing support for him to challenge Zahid, Ku Li has yet to confirm his candidacy.

Actually, I'm begining to suspect that Zahid will eventually win the post uncontested.

I believe that would be good for Anwar in the event his PKR needs some extra fire power later.


But of course, that goes with a question mark, okay.
Posted by Annie at 00:50