DAP has stepped up their campaign in Gelang Patah following DS Najib Razak's visit to the constituency and other parts of Johor yesterday.

Tonight, the party's ceramah at Sutera Mall, Skudai recorded the biggest turn out, which I estimated at over 20,000 people.

I took a drive in the area and observed cars parked as far as three kilometer away from the site of the mammoth gathering.

As it were on previous DAP ceramah there, the crowd was overwhelmingly Chinese.

Families with children among them were seen walking the long distance from their cars to the site of the ceramah. 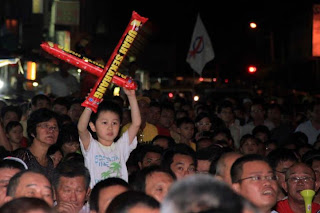 I didn't bother to stop as I think I know what the speakers are going to talk about. It's the usual BN bashing and whipping up of thinly-veiled racial sentiments.

If one is to judge from the attendance at the DAP ceramah, then the outcome of the election in Gelang Patah should be without any doubt - DAP stalwart Lim Kit Siang will thrash BN's outgoing Johor Menteri Besar Datuk Abdul Ghani Othman.

Such outcome would mean that Najib's attempt to place Ghani's candidacy there as a symbol of Malaysian moderate political culture where race is not the definitive consideration in the choice of leadership should have failed.

Gelang Patah is after all a Chinese majority constituency and I believe no Malay had ever win in such a constituency.

Ghani, as usual was attending several small gatherings with voters in the constituency tonight. Among the places of the meetings were at a church where he expressed worries over the increasingly robust campaigning as polling day draws near. He apparently stills believes that his focused, yet low-key campaigning style should be the answer to such aggressive tactics.

Despite sayings to the contrary, based on my own experience, the number of people turning up at a ceramah is not really the best indicator of a party's strength.

This is especially so in this instance as the crowd at the DAP ceramah is overwhelmingly from only one race.

Do bear in mind that the ceramah of Pakatan prior to the 2008 general election were mostly attended by racially mixed crowd. This time, the Chinese may find that they will all be on their own going against the current.

By the way, if the number of people of ceramah is an indication of a party's strength, Pas which is a master at mustering such huge crowd at its ceramah would had sunk Umno a long time ago.


Despite all that, I honestly believe that Ghani's task at convincing especially the Chinese community in Gelang Patah to support him based primarily on his good track-record has become an increasingly steep uphill climb.

I am not saying that Ghani stands no chance at all, but it's a fact that the draw of ethnic identity in deciding the choice of who should represent the community is too alluring.

It is just the nature of Malaysian politics for now. Kit Siang knows this and is exploiting it to the hilt.