Anwar turned out to be worse than I thought he is.

Here is the story


Anwar to run for Kajang seat

Cannot be PM, be MB pun jadi lah, it seems.

Really nut case this one.

First, there was this story quoting sources yesterday by the reputedly top political writer in the country Jocelyn Tan,

Anwar Ibrahim to be Selangor MB?


Several hours later the story had been denied by both DS Anwar Ibrahim and PKR's Selangor MB TS Khalid Ibrahim.

But knowing how Anwar operates, I told myself that I rather believe in Jocelyn than Anwar. Well, maybe Jocelyn may not be 100 per cent accurate, but at least I am sure Anwar is brewing something.

Remember his great Sept 16 going to Putrajaya lie and the latest about the Japanese conspiracy against him?

True enough, later in the late afternoon, this story came in,

I wonder what Anwar offered the Kajang guy to make him did that.

Anyway, my bet is that Rafizi Ramli, the PKR's darling boy at the moment, will contest in Kajang and will become MB. Well, the guy is not that young at 37, despite him projecting the boy boy image for his PKR wonder boy persona.

I don't think Anwar wants to be MB. It's beneath him, okay. He wants to be PM and nothing else.

Khalid's nemesis Azmin Ali, the long-time favorite of Anwar could not be the one as MB also as it would have been too blatant.

Azmin after all is already a Selangor assemblyman. So, if he is the one, then PKR would not had vacated the Kajang seat.

Khalid, will meanwhile joined the rank of other disgruntled ex-PKR guys, I think.

He really should not had fought Azmin.

As far as the by-election is concerned, I think BN should not even contest it.

Why should the people be subjected to these sorts of nonsense just because Anwar wanted to sort out the mess in his camp?

Meanwhile, Umno's currently most popular vice-president DS Ahmad Zahid Hamidi said something which I disagree with in this report

and this is how Anwar responded

Come on la Zahid, why suddenly you sounds very reconciliatory. What happened to your garang image?

It did cross my mind when I read the report that maybe Zahid wanted to be pally pally with his former mentor again as he was when he was still the Umno youth chief during the troubled time of the late 1990s. 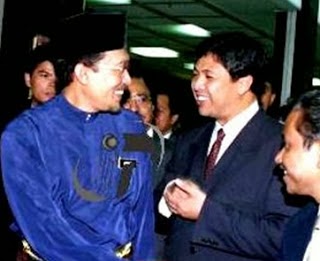 I don't believe that DS Najib Razak should consider talking to Anwar at all.

Anwar is after all facing all sorts of problems with his party and family now, with the PKR's party election just around the corner.

I think that's why he wanted all these so-called peace talks.

It got nothing to do with finding peace and all that. Instead, as usual, he was just trying to wriggle himself out of his own created mess.

After all, wasn't it Anwar and his gang such as Lim Guan Eng who first stirred up the racial religious shit which now entering the fire bombing of churches phase.

Of course they are blaming it all on Umno.

But wash't it Guan Eng who first went around telling the Chinese that they were being treated as second class citizens?

Wasn't it also Guan Eng who reignited the whole "Allah" issue in his Christmas message in 2012 just before the 13th General Election?

Najib must not listen to his stupid advisers and expensive consultants on this one.

He definitely shouldn't listen to Zahid too.

He must remind himself that Anwar and his gang have been going around these past years calling him Najib Monggolia and other stuff as well as insulted and slandering his wife at every turn.

Najib must instead be firm and focused on leading the government and BN. He shouldn't entertain all these Anwar's bullshit.

Whatever it is, I'm pretty much pissed off with the whole Anwar gang's maneuverings.

Can't they at least wait until after the Chinese New Year celebrations to pull these sorts of stunts?

They really don't want to give us a pause from all these political drama.

Sometimes I wondered, why can't their supporters see through all their nonsense.