Chinese tsunami not receded by much in Johor

It was quite obvious from my observation on the ground for the past two weeks that the Chinese tsunami which hit my home state hard in the 2013 general election has not receded by much.

It's very hard now for me to believe the talks about shifting of Chinese votes back to BN.

Okay, maybe there are some who are coming back to BN, but I believe that they are not big enough in number that Pakatan, with DAP playing the leading role, will still get at least 80 per cent of the Chinese votes in Johor.

I asked via WhatsApp someone from my hometown Kluang whom I wholeheartedly believe on why the Chinese have remain hostile towards BN.

And this is what she wrote to me, which I'm publishing in full,

1. For Chinese there is a term called 贪官污吏 (u can google translate) and the administration is being viewed as such now.

U can argue that it is fakenews and all about 1MDB is not true but sorry that’s how ur people view you.

Maybe not all but at least the top level include their wives I guess.

The current BN has successfully created an image of 贪官污吏 meaning corrupted civil servants which make a lot of good civil servants unhappy too. They may be the silent group that can slaughter BN this round

2. I don’t think things were that bad still in 2013 there are still people who believe Najib is just a victim of Mahathir constant belittling of his successors but this time I can sense that the sentiment is very different

3. My uncle, an EC graduate, chinese, English speaking, civil servant all his life and now still enjoying pension from the government, he has been active in MCA all his life.

Last election he was rooting for Gan (MCA candidate) in Kluang and this round he just stayed at home and openly supporting opposition.

He said most of his gang, all former long time members of MCA, now kind of miss Chua Soi Lek (former MCA president) because he at least would stood up for the Chinese against Umno.

He said now the current MCA only follow Umno so what’s the point of sending them into the Cabinet just for the sake of Chinese representation on paper?

He said Chua is a man of principal at least he immediately admitted the scandal and resign - that’s what a man should do.

4. On Mahathir. My uncle said the old man is just a human.

Yes he has made mistakes but not because of what but because he is a human.

And ruling our country was not easy. He said Mahathir has made us proud.

He said most Malaysians were prouder as a Malaysian then vs now.

At least Mahathir can handle all the foreign media and has no problem defending his policy.

People from the west who hated him still respect him. But we don’t see this kind of quality in our current leaders now.

Btw my uncle is 75 now. He voted for BN all his life but I doubt so now.

Well, that's the most honest opinion I got so far from a Chinese from my home state. 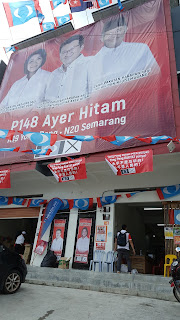 He more or less confirmed the general Chinese sentiment in Johor.

He among others said that DAP was having a tough time trying to make the Chinese not be too enthusiastic like in the last general election in order not to spook the Malays.

So, Johor BN should know now what's happening on the ground and not be blindsided by their so-called analysts and experts who said that the Chinese are back with them just to make everyone around the campfire feel warm and cosy.

They simply should not be overconfident and instead work harder and smarter for the remaining few days of campaigning to avoid the probably remote but real danger of defeat.
Posted by Annie at 09:00