Well, I think it's a good thing.

That way the remnant of what used to be BN/Umno could be rebuilt to be a good opposition.

Let the bad ones leave.

For instance, of the early defectors in Johor, one of them was actually among those mentioned in this post of mine on March 28 last year;

My sources said the operation is indeed ongoing and MACC is currently cornering at least three "big fishes" and quite a number of smaller ones.The three big ones are two state assemblymen, one of whom is a high ranking office holder in Kota Iskandar, and the third, who is also a politician, holds a very powerful post in the state administration.They were said to be very rich.For example, the assemblyman who holds no position in Kota Iskandar was believed to have at least two palatial homes, eight luxury cars and children who own several plots of land each and maximum Amanah Saham Bumiputera accounts.The other two "big fishes" were believed to have even more than that.

I'm quite sure more of such kind will jump over to PH.

Remnant of BN/Umno will be small indeed but it's better that way.

Only the good ones will stay and they could start the rebuilding properly.

I believe that's what the rakyat need.

They will need this new opposition in case the new PH government goes bad.

I know, most of you all will say there is no way it will go wrong.

After all, the evil BN/Umno have just been defeated.

Well, I do hope some will remember there must be checks and balances.

Personally, I hope the new PH government could at least keep its promises to give us freedom of press and expression.

And maybe repeal all the repressive laws like what the BN government did with the ISA.

Anything else to add to that would be bonus.

I had a WhatsApp conversation about all these with someone who is a DAP supporter and this is what she sent me; 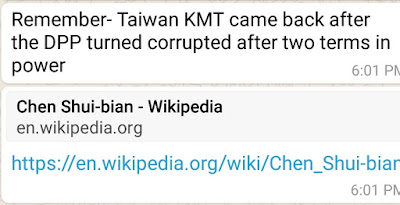 Here's the link to read about the Taiwan's Kuomintang party;


Maybe the new opposition people can read this too;