GE14 jalan-jalan in Johor and a Namewee video

I've been driving around a lot over the past two days.

No time to do any extra posting.

I actually did my last post somewhere near Parit Raja where I spent the night on Friday.

That evening I drove around Batu Pahat after meeting my DAP friend in Yong Peng.

Surprisingly the election atmosphere was not so much felt in the Batu Pahat town.

Relatively not many flags and posters in the town centre.

It's more felt in the surrounding villages.

This is at the village where I stayed that night; 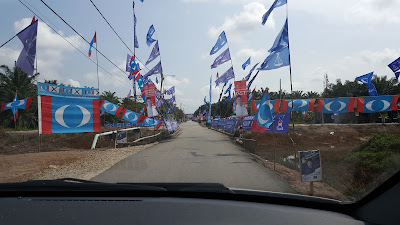 My friend, whose place I stayed at that night said it was the first time that the opposition party workers dare to put up their posters there because it's an Umno stronghold.

The village is in the Sri Gading parliamentary constituency, a "white" BN's area.

Yesterday, I first drove from the village to my hometown Kluang.

I've not been back there for quite awhile.

After passing the GE14 hot spot of Ayer Hitam where DAP and MCA are fighting over a Malay majority constituency, I stopped at my father's kampung to visit the family graves.

I proceeded to Kluang town and discovered that the flags and banners there were more numerous than in Batu Pahat.

Going back to Kluang has always been an emotional experience for me.


It makes me miss my mother so much at that moment . She's now looking after my elderly grandparents in KL

I stopped at the Kluang town centre to visit my friend's family watch shop located in front of what used to be the main bus station, which has now been turned into a parking lot.

After that I drove back to Ayer Hitam town where I was supposed to meet a friend who was driving down there from KL.

It turned out that the guy's appointments with BN candidate Wee Ka Siong and DAP candidate Liew Chin Tong had been arranged in such a way that I have to go to Yong Peng to meet him.

So, I drove again to Yong Peng like the previous day and waited for him at the famous Traffic Light Coffee Shop.

As I was sitting there alone, it so happened that a group of DAP party workers came in for a drink and one of them is a very dear friend from many years ago in JB.

It was a short but very happy reunion.

She and the others were there to help Chin Tong's campaign.

I later met my friend from KL at another kopitiam near the DAP operation centre after his appointment with Ka Siong and Chin Tong.

That night I went to see the ceramah by Tun Dr Mahathir and other former Umno oldies in Ayer Hitam.

My DAP friend said they estimated the crowd at about 1,500 people.

After the ceramah, I drove back to JB and treated myself by staying at a better hotel. I've been staying mostly at budget hotels ever since I came here more than two weeks ago.

This morning my friend picked me up at the hotel and took me jalan-jalan.

First, she took me for some shopping at the newly opened Paradigm Mall, which used to be the long abandoned Kemayan City project from the first half of the 1990s.


After that we drove around a bit looking for a place to get a nice massage.

It was then that we passed the Lot 1, which may look okay in this picture but is actually still mostly abandoned since the days when TS Muhyiddin Yassin was the Johor menteri besar in the 1990s. 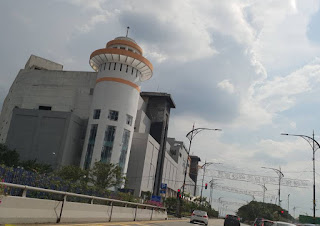 Back then, there were several such abandoned buildings. Some were revived such as the one turned into the Paradigm Mall recently and another one called Danga City Mall which was revived before the last general election.

I always think that Muhyiddin should not have allowed the building of those malls back then when he was the MB.

Hopefully if he becomes the MB again in the event Pakatan wins this general election, he wouldn't make the same mistake again.

I ended my rounds with my friend with a late lunch at a Japanese restaurant near Sutera Mall which compound was the site of mammoth Pakatan rallies during the last general election five years ago.

There are no rallies there now.

I was told that the management of the mall has had enough of political rallies there which was said to be not so good for business.

Well, for this general election, it seems that the rallies, particularly in Johor were rather small such as the one in Ayer Hitam last night.

Okay, that's about it.

Tonight I'm back to sleeping at a budget hotel.

Oh, one more thing - someone requested for me to write a bit about this video by Namewee, urging Malaysians to vote;


Honestly, I don't really catch much what he was rapping about except the part where he whacked Perkasa.

Well, I don't mind that as I'm no fan of Perkasa too.

I just don't like Malay extremists or any other kind of extremists.

I actually cringed when Dr Mahathir became Perkasa patron back then.

Hopefully, if Pakatan wins and the handsome old man becomes PM again, he would stay away from those clowns.
Posted by Annie at 20:19