Just got back to my hotel room.

Had dinner with some pro-BN friends and then chit chat till past midnight.

There were those from KL for the election like me and others who were JB based.

Learnt a bit or two about the current local political scenario, especially from the Johor guys.

I have to admit that I'm not as well versed of Johor as before because I've been in KL for quite a while.

Nonetheless, I still think I can tell which stuff that they told me were real and which were just bullshit.

But I don't really mind the whole thing too much, because I always enjoy listening to them all.

Yup, even the bullshit parts.

Anyway, despite all of them expressing confidence that BN will win in Johor, I did notice that they were concerned about the possibility (even if it's chances being remote) of Pakatan pulling an upset in the state.

It's actually quite hard to predict how it's going to be because of the "silent" campaigning in social media.

I believe that for Johor, it will hinge primarily on how many Johorean Malays will switch to support Pakatan.

Other than the campaigning in cyberspace, the fact that most Johoreans tend not to be too emotional when it comes to politics made it even harder to guess the possible outcome of this election.

And I still think it's going to be quite a tough fight till the end in Johor.

Whatever it was, I had a quite good day yesterday.

In the morning I had breakfast at the W W Laksa House at Taman Waterworks. 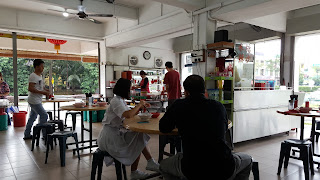 It's something I used to regularly do but haven't done so since the last general election five years ago.

In the afternoon, I went to Aeon Bukit Indah. 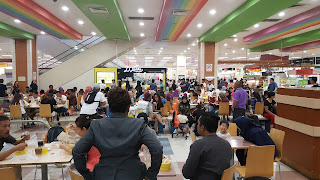 It's nice seeing people enjoying themselves and appeared not to be bothered by the ongoing GE14 campaigning.