Two lumps of shit and a question to Khaled Nordin

Dear Umno people, do you all still want to keep these two? 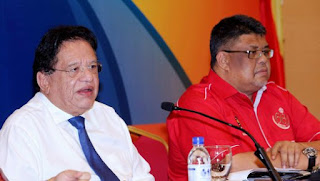 If you all do, then I advise you all to check and find out who made the most money from the BN/Umno's party flags, banners, posters, t-shirts, billboards etc business for the past two or three general elections.

In fact, I think you all should demand the party leadership to engage external auditors to check on how those two handled the Umno headquarters.

Clean up the place, okay.

That is if you all want to fix your party after the humiliation of GE14 lah.

You all don't want also, can. No problem.

Your party can continue to rot for all I care.

For those who don't know, those two are Umno secretary-general Ku Nan and party working secretary Rauf Yusoh.

They are very rich people.,,,at least by my standard.

Talking about people making lots of money from the party, I would like to ask the current Johor Umno leadership on who among them made the most money from the lavish spending on flags, posters and billboards during GE14 that day.

The billboards, for instance, were amazing. Almost like during the coronation of Sultan Johor.

Khaled, how much the party spent and paid to whom for the expensive looking billboards such as this one along Jalan Skudai, JB? 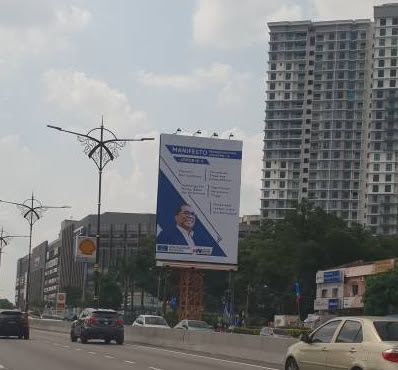 There were so many of these gigantic billboards of grinning Khaled that day.

Khaled, people saw you grinning on the billboards, they suddenly felt like voting for BN ka?

Your boys told you that, did they?

And those billboards must be very expensive.

I do know that those small stupid looking ones made up of wood structures and put up at road junctions cost at least  RM5,000 each.

Some people must had made millions that day despite BN being humiliated at the polls.

Johor Umno people, you all have to get rid of all these people if you want to take back your state from DAP.

Really, your state is controlled by DAP now.


I know, some DAP guys have been visiting this blog and whacking me for repeatedly highlighting that post.

But that's the truth.

No need to hide la.

Anyway, earlier today I was so bored that I went to D'Pulze Cyberjaya, which is just 10 minutes away from where I'm staying.

Did a bit of knick knack shopping at Daiso; 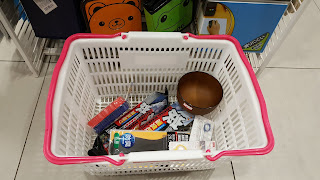 Also bought some salad and fruits for buka puasa.

I'm hoping to lose some weight.

Here's a bit of song I was singing as I was getting bored in my room earlier;