I think this is quite unfortunate;

I had hoped for this,

Hopefully they won't cancel the next phases of the MRT project too just because that was started by Najib.
I think MRT is important to have.
If we can't be connected by rail all over the country, then at least we could do so in KL. Otherwise we will forever be stuck in a third world traffic jam city.

Yes, please don't scrap the next MRT project.
If they want, I can even delete the part about MRT being started by Najib and say PH started it instead. That's better than getting stuck in jams again.

Well, what to do. It's already cancelled.

The reason given was because the country doesn't have the money for it.

However, earlier today, a friend gave his opinion that the MRT project was really cancelled because the new government doesn't like the contractors appointed by the previous government and not because of financial reason.

He said the project would likely be revived later when they get a more favourable contractor to do it.

Don't know lah...honestly, I don't really care who is the contractor as long as we can have a proper rail transport in this increasingly jammed city.

This evening it took me an hour and half to get home because of the jam. It should have taken me 45 minutes to do so.

Maybe I should use my bike again to commute.

But seriously, is the country so poor now that,

Last time we got that Arab donation thing, now we got this rakyat donation pulak.

Maybe it was really meant for fellas like those billionaires Robert Kuok and Daim Zainuddin.

Ya, they are the ones who should donate to the government.

One billion ringgit each. How about that?

Maybe our royalties could also chip in.

Well, I don't think I have much to spare.

How about you all ? Got money to donate to government or not?

Whatever it is, guess from all the noises made by the government, our country is really in bad shape.....

Except that, how come that day our handsome new MoF Guan Eng said


Everyone said our country is going bankrupt, how come he said like that.

And then he also said the country's debt is over a trillion ringgit.

These are all very confusing, okay.

Some more, it was also announced today that

Malaysia to develop island near Singapore


I think that would be something like China's reclamation project in the middle of South China Sea.

Maybe not so big, but could still be quite costly.

But never mind lah, at least it's for the country's sovereignty....I think.

Ya la. After we lost the Pedra Branca/Pulau Batu Putih.

Maybe we can after that tell off the Singaporeans like we used to back then.

Eerrr....actually I don't really like that. I don't want to quarrel with my Singaporean cousins.

I rather have the full specs MRT, okay. 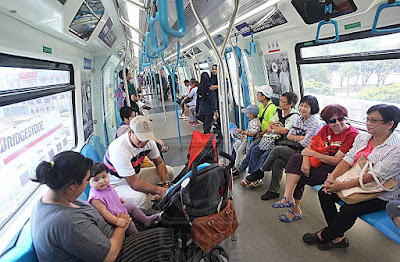 I really like the MRT and hoping that we all can have a good one like in Tokyo and other cities of the developed countries.
Posted by Annie at 20:43