The Star expects parliament to be dissolved between March 28-30


The newspaper put its speculation on its front page.

The Star's reputation is at stake here.

However, today, there's no followup on the story by officials.

Nobody has confirmed or deny the story.

Still, the story was written by the newspaper's top guy Wong Chun Wai.

I think Chun Wai must be very sure about his sources.

Otherwise, he wouldn't have published the story.

So, I'm inclined to believe him.

The only thing that puzzled me though, was that these kind of cock sureness about election dates and such used to be that of news organisations closer to the BN and Umno leadership such as Utusan or New Straits Times.

Whatever it is, the general election is very near.

Better get it over and done with.

Hopefully we can move on with more important things in life after that no matter which side wins.

However, I believe if BN wins, the fighting will continue.

The opposition people have never win, so, if they lose I think they will as usual fight again for another election.

But BN people on the other hand have never lose. So, I believe BN and Umno will close shop if that happens.

I think Pas will close shop too.

I think everyone will jump ship to join the winners.

But this I think will not stop the fighting either.

Once BN and Umno are gone, the Pakatan people will start to fight each other.

They will split into the establishment and opposition as it is now.

My bet is that PKR and DAP will form the government as a multi-racial coalition while Pribumi and Amanah become the new opposition in the form of a Malay Muslim coalition. 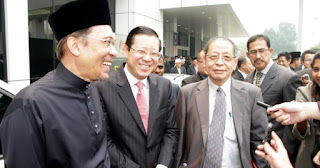 Sabah and Sarawak parties I believe will gang up with PKR and DAP as their coalition is multi-racial.

Yes....I think that will be the scenario if Pakatan Harapan wins.

Well, I just hope this country will not burn down after that.

But then again, that's just my stupid theory.

So, you all don't get too scared, okay.

Enjoy this from a classic rock movie instead,