A hungry mob is an angry mob (updated) 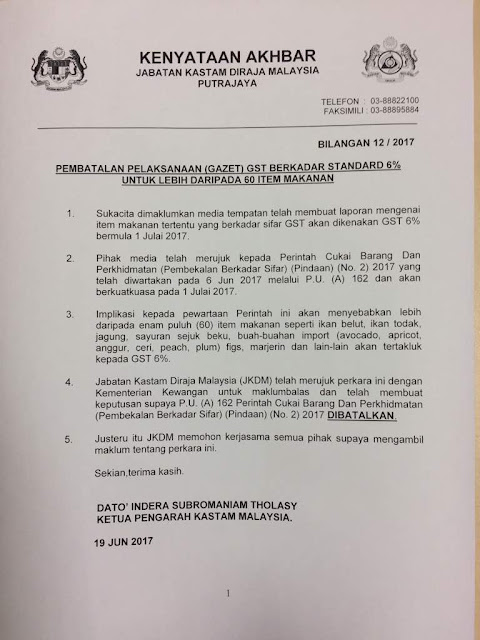 All the Chinese newspapers' main frontpage story today are about the government going to start charging GST for some food items such as sweet corns, potatoes, grapes, mee hoon, kuey teow etc. 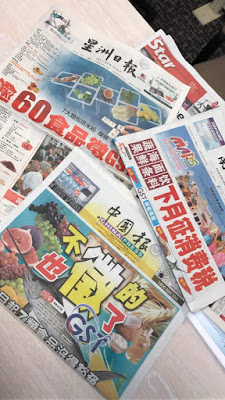 Apparently it was an "exclusive" story that they shared.

The other "mainstream" newspapers don't seem to have the story.

The Star Online was however quick to check and confirmed the Chinese newspapers story this morning,

GST on more than 60 food items from July 1

PETALING JAYA: More than 60 types of food items will have the Goods and Services Tax (GST) imposed on them starting July 1.
These include certain seafood, vegetables, fruits, tea, coffee, spices and noodles, China Press reported yesterday.
Customs Department director-general Datuk Subromaniam Tholasy confirmed the report and said a full statement would be issued today.
“It’s only a few items not consumed by the masses,” he said.
The new items that will be levied with GST include eel, swordfish and imported fruits like avocados, figs, grapes, nectarines, cherries and berries. However, vegetables such as potatoes, long beans, peas, spinach and sweet corn would also be taken off the GST zero-rated list.
Other items include bihun, kuey teow, laksa mee and coconut oil.
The Government introduced GST in April 2015 in the form of a 6% tax on goods and services. For the complete list of zero-rated goods and services, visit gst.customs.gov.my or www.federalgazette.agc.gov.my.

I'm of the opinion that the timing of this whole thing is all wrong for the BN government.

Is it really necessary to do this now?

It's near Raya la.

These kind of stories are not good to be discussed when people get together to celebrate Raya.

Can't they do it bit by bit instead so that people don't get the perception that the cost of living is getting higher without end.

And the fact that the Chinese newspapers are the ones which broke the story is even worse.

Now the mainstream media have to follow their lead.

They should have at least preempt the story by being the ones who break the story, complete with the rationale on why the move was taken.

Some may argue, that a few sen of price increase is nothing much, but for the people out there earning small salaries, it means a lot.

Higher cost of living for me is a more dangerous threat to the government than all the other issues put together.

1MDB, for instance, is to me just an issue only understood by those who know the financial world. Ordinary people like me don't really understand it.

Sometimes I feel that those who claim to know the 1MDB issue and boasting about their higher intellect are merely a bunch of show off.

I found them irritating.

Now, issue of higher cost of living is more immediate and easier to understand.

Pricier goods - you go to the grocery store and you can understand what it's all about.

Townsfolk or kampungfolk, they all can understand it.

If they are not happy about it, then the government will be in trouble.

If the BN government don't care about it, then that's not my problem.

If they care, they better do something to manage the people's perception on this whole thing.

I know, the opposition is in a mess, but as I wrote previously, if the people get too angry, they would just show their anger without thinking of the consequences.