It's past 4am as I'm writing this.

Just got back from hanging out with friends watching the announcement of the G14 results.

As you all should know by now, BN was almost totally wiped out.

No other way to describe it.

The rakyat have spoken.

I have to admit that despite expecting BN to suffer in this general election, I didn't expect it to be annihilated like that.

In a post just after the dissolution of parliament, I published this What'sApp conversation I had with a foreigner friend who have business interests in this country, 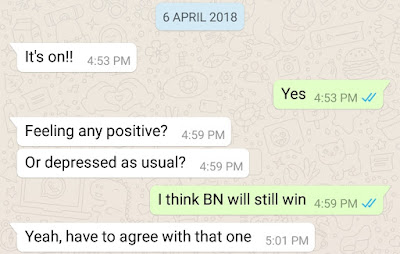 This is part of our conversation today as it became clear that BN has lost GE14, 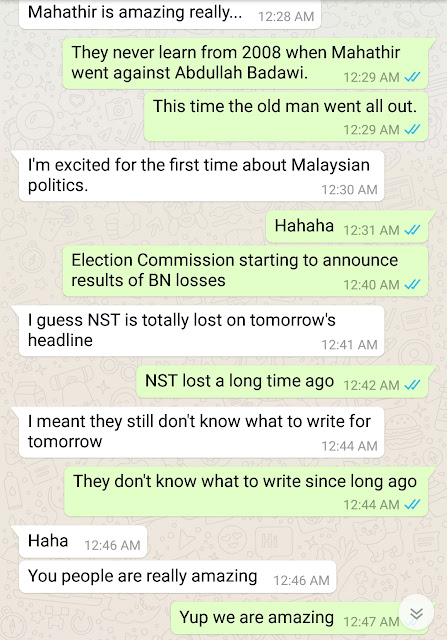 Well, what else could I say to my friend.

Nonetheless, I really do believe that Dr Mahathir was the primary factor behind the BN's destruction.

Without him Pakatan could never defeat BN.

Najib and the other BN leaders totally under estimated the handsome old man.

I did try several times to warn them of the consequences of fighting Dr Mahathir such as in this post on Sept 11, 2015,


I also tried to tell others on the BN side not to be too harsh in fighting people who went along with Dr Mahathir, such as in this post on Dec 30 2015,

In the fight, I was accused of many things including of being a DAP cybertrooper, which was so ridiculous that I just didn't bother to really answer back.


I believe I did try my best to be neutral after that but it was hard for me to stay disengaged from politics.

It's indeed tough to make such a stand as no one really believe I could do so.

But as I said, I tried my best.

And of course, I kena whacked by both sides.

But I accepted it all.

I did try from then on to write just from my observation and comment on it based on my understanding of the situation.

I intend to continue with this stand as much as I could with now that Pakatan taking over the government of this country.

As I mentioned in my last post two days ago,

Anyway, even if Pakatan wins this election and forms the government, we will still need people who could make a fair assessment from the middle ground.I intend to be one of those.Hopefully I could.If BN wins, I still wish the same.This is important I think. Just look at the state of mainstream media, if you don't believe me.

Need to sleep a bit.

Driving back to KL later today.

I believe that it's going to be a new Malaysia from now onwards.