I do wonder, don't the Chinese government know that Malaysian Chinese are suffering from being discriminated as second class citizens and oppressed in every way by the evil Malays of Umno?

President Xi Jinping surely would had been reluctant to visit Malaysia the other day if his officers had informed him about the predicament of the Malaysian Chinese.

Surely he would not want his administration to be seen as friendly with the dastardly Umno regime which is imposing what the Chinese heroes of DAP described as an oppressive apartheid discrimination against his fellow Chinese kith and kin in Malaysia.

Yes, how come, Xi, being the most powerful Chinese in the world still came to Malaysia and being pally with those racist Umno fellas?

Ok, if he was only friendly with Prime Minister DS Najib Razak, I can understand. Najib after all did quite a lot to make the Malaysian Chinese happy before the 13th General Election. He also got a son who can speak beautiful Mandarin and a younger brother who had made the world know that he loves the Chinese more than his fellow Malays. The fact that the Malaysian Chinese spat on Najib's face during the general election didn't really matter la.

But what I don't understand is, how come Xi made it a point to meet the most evil and Malaysian Chinese-oppressing old man in the universe, Tun Dr Mahathir Mohamad? Didn't Xi know that him meeting with Dr Mahathir made all those Malaysian Chinese heroes of DAP gnashing their teeth and pulling out their hair in frustration?

It can either be two things,

1. The Chinese embassy's political officers are sleeping on their job and did not report on all those oppression endured by the Malaysian Chinese as claimed by the likes of Chinese demigod Lim Kit Siang and daddy's boy Guan Eng.

2. Xi had a good laugh when he read the report by the Chinese embassy's political officers that the Malaysian Chinese are being oppressed by their government.

Okay, maybe he just smiled with amusement like this, 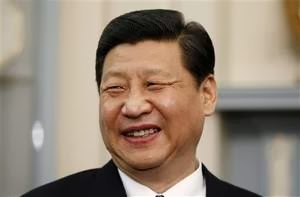 Well, I tried to find a picture of Xi laughing but can't find any. The guy apparently just smile at everything that amuses him instead of laughing. You don't believe me, go google image, ok.

Anyway, I did wish that Kit Siang and Guan Eng had requested with the Chinese embassy people to include in Xi's itineraries a meeting with them.

The father and son are after all the undisputed supreme leaders of the Malaysian Chinese.

A meeting with Xi would had enabled them to highlight the plight of the Chinese community which was suffering from acute discrimination under the racist Umno Malay-led government.

They would have been able to tell Xi how the Malaysian Chinese had been deprived of basic human rights and are living in squalor like the blacks of South Africa under the white-aparthid regime.

Xi would had definitely listened to them and uses his powers as the president of China to exert pressure on the Malaysian government to stop those harsh treatment and discriminatory policies enforced upon the Malaysian Chinese.

Xi had after all been described by Lee Kwan Yew, who is admired by almost all Malaysian Chinese as reported here,

Nonetheless, I still believe that, if indeed such meeting took place between Xi and those father-son Malaysian Chinese supreme leaders, the Chinese president would had laughed his head off as soon as they start to open their mouth to complain about the Chinese community in Malaysia being oppressed and discriminated.

Damned, if only I can find a picture of Xi laughing his head off.
Posted by Annie at 01:29