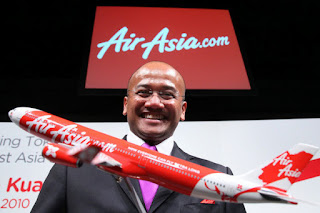 “I am Malaysian. I am anti-racism. I am disgusted by Utusan’s editorial stance."

Utusan's big sin according to Azran - asking the Chinese community what else that they want after their almost total snubbing of DS Najib Razak's 1Malaysia at the GE13 despite all the overtures made to them by the prime minister.

Azran feels that Malays should not ask such a question to the Chinese.

So indignant was Azran that he was also reportedly remarked that AirAsia X is withdrawing all advertisement of the airliner from Utusan.

Well, so much for the Buy Cina Last campaign. Just as it was about to begin, a successful young Malay of the world already told the Malays who reads Utusan that he would not let his beautiful aircrafts be dirtied by stupid Malays who are racists by virtue of reading Utusan.

Actually, the AirAsia X does not belong to Azran. He is just the Malay face of the airline. You can read about the airline here AirAsia X


I wonder whether Tony Fernandez would had appointed Azran as the airline's CEO when he first set it up if Azran is not a Malay.

I also wonder if Azran had ever bothered to know about the many questions asked by the Chinese newspapers about the Malays over the past years which inflamed the community's racial sentiments leading to the Chinese tsunami of GE13.

If he hasn't, then I would suggest that he read them and decide if AirAsia X should
pull out its advertisement from Sin Chiew, Nanyang, China Press, Oriental etc.

Anyway, back to the Utusan offending question, well, Azran, here is the answer to
that question by a not so offended Chinese -

For the rest of what that Chinese said, you can read it here