A bit on the Azilah's SD and Media Prima retrenchments

Yesterday there was that SD by former policeman Azilah that he received order from Najib to kill Mongolian lady Altantuya.

Why didn't Azilah, who is now on death row, said that back then or at least right after Pakatan won and Najib was kicked out from the seat of power?

Don't know lah. Personally I don't care much about SDs. So many made in the past which turned out to be bullshit.

Whatever it is, Najib had rubbished it.

But I think AG Tommy Thomas will act on the SD.

For what comes next, we simply have to wait and see.

Still, I think BN, particularly Umno need to do something to counter this latest move to undermine its recovery effort.

Personally, I think leaders should know when they become a liability and give way so that they don't drag down the party with them.

Innocent or guilty doesn't matter. Once a leader can't handle a personal issue which affect the party, he/she should leave. At least until he has cleared his name.

I have actually been bitching about this since the Shahrizat's lembu condo controversy several years ago.

Well, another disturbing news yesterday was the announcement about the retrenchment of over 500 NSTP staff.

I guess things must have been very bad for the company. 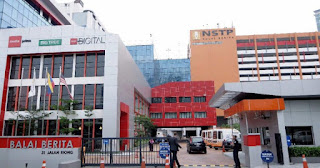 Or is it just a strategy to get rid of unwanted people?

Well, more to come as Media Prima, which is the parent company planned to get rid of more people at its other media outlets.

I wrote about the organisation in the past


A bit more on the Media Prima war


Media Prima after the civil war


I guess it's a vicious cycle.

I feel so sorry for the young journalists who lost their job there.

But not so much for their seniors who were involved in the "war".

Yup, you kicked people out back then, now other people kick you out too.

Whatever it is, I believe that everything that comes our way is part of Allah's will and we have to accept it with an open heart.

If we are patient and steadfast, insyaAllah things will get better.

Hopefully those who lost their jobs will get new ones soon.

Hopefully, there will not be too many of these retrenchments during this hard time.