I'm still at the house in Puchong where my father's immediate family members gathered for the first day of raya.

It's actually the house of my aunts.

All three of them are singles.

All are life-long BN supporters despite none being member of any political party.

I joined their conversation in the kitchen this afternoon and among the things we discussed was a little bit of politics.

They seemed to take the recent BN's defeat in good humour.

That's more or less the tone of their little political talks.

Interestingly, they didn't seem to care much about Umno's future and its coming party polls.

They were actually more interested about PH, especially Dr Mahathir's leadership of the ruling coalition.

One of them is still a great admirer of Dr Mahathir, another is now against him after he went against BN, and the third, should I say, appeared neutral.

The one who is now against Dr Mahathir raised the question of what will happen to PH after the handsome old man is no longer around to hold the coalition together.

Then the two of them got quite a bit serious on the merits of Anwar replacing Dr Mahathir at the head of PH and as PM, with Azmin's name being mentioned several times as an alternative.

My other aunt, the one still admires Dr Mahathir then suddenly came out with a surprising remark. 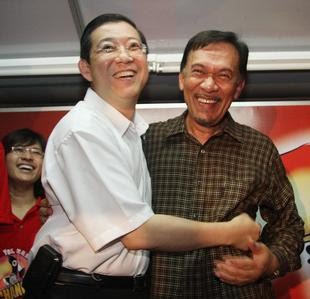 My other two aunts laughed at that but it turned out that she was quite serious about it.

She was a UPM student in the early 1970s when Anwar was a popular student leader.

Well, maybe she has a point.

Still, I hope Dr Mahathir will be around for a long time more.

I think it can be quite scary if he's no longer around.
Posted by Annie at 22:13