A Japanese friend of mine sent me a WhatsApp message last night telling me that he just met a close aide of Dr Mahathir, who is also my friend in Tokyo.

From the tone of his message, I think he was very happy.

I sort of introduced them at the height of Dr Mahathir-Najib fight in 2015.

I was quite happy too that they met again.

My Japanese friend represents a major company interested to invest in Malaysia.

I hope everything went well with their meeting and we will have that potential investor coming here soon.

I believe many good things will come out of it.

Regular readers of this blog should know that I'm quite pro-Japan.

I prefer that country more than others.

So, that's why for me the best decision of Dr Mahathir since he became PM again is,


It's refreshing for me that we are shifting a bit from the current trend of giving too much emphasis on China as source of investments and such.

I was never really comfortable with us being too dependent on China.

After all, I was unhappy with all those Chinese investments along the coast of Tebrau Straits long before Dr Mahathir pose for this picture, which I think helped PH a lot to defeat BN in my home state Johor 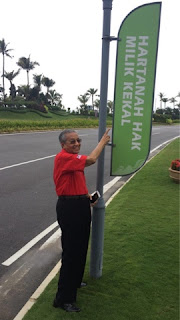 You all may check the archive of this blog if you don't believe me.

See, that's even before the Dr Mahathir-Najib fight.

We never have that sorts of trouble with the Japanese investors.

And they have been coming here opening up factories and such to help boost our economy since the 1980s when the jobs they created were meant for us Malaysians instead of Bangladeshis, Indonesians, Nepalese etc.

If I'm  not mistaken, Japan is still our number one source of FDI today.

I sure hope we are going to get more of such investments with this new round of Look East policy.

Maybe more in high tech stuff instead of the labour intensive ones this time.

I'm also much more comfortable with Malaysia being close to Japan because that country had been doing much in helping us in things such as research and development.

They used to give us quite a lot of development grants and even sent their experts to help out in improving our technical know how.

I also believe that we can still learn a lot more from them, especially in improving our work ethics and culture.

Just a few days tour of the beautiful Kansai region.

I've been writing about visiting Japan again since then but never did so.

There's always something coming up that I had to cancel my travelling plan.

It will soon be autumn again over there.

Maybe I'll go disturb my friend in Tokyo as I always promised him.