Killing the idea of Malay unity

So, now they had frozen Umno's bank accounts.

It was said that the party itself would be deregistered soon.

It's original primary objective is to unite and take care of the Malays.

It was founded when the Malays were about to totally lose their country via the British's Malayan Union.

It's the organisation which united the Malays in this country for the first time after hundreds of years of colonisation.

Being united empowered the Malays to lead this country to its independence.

It also enabled them to get out of poverty through affirmative actions of the government led by Umno.

Well, it looks like they really want to kill off that Malay party this time.

More significantly, they want to kill off the idea that the Malays should be united to better themselves.

Okay, I know, you all going to say that it's a party full of corrupt, racist and evil people.

Yeah, as if the other parties do not have such corrupt, racist and evil people. 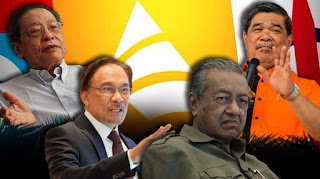 Come on la, they even used to say that Dr Mahathir was a corrupt, racist and evil person too.

In fact, they used to call each other that, okay.

For me, Umno has about three million members and most of them are actually good people.

I used to work with those good Umno people and I know that they are not corrupt, racist or evil.

And he is not the only one.

And Umno as a party is a good organisation.

Read its constitution and if you are an honest person, you would agree with me.

If Umno is corrupt, racist and evil, I don't think Malaysia would be what it is today after the party ruled the country for over six decades.

It's the best country in this region, except maybe Singapore.

Yes, there were bad things that happened along the way, but this country still prosper and its people live a relatively good and peaceful life.

Which countries haven't gone through bad things in their history, anyway?

Malaysia is perhaps the only real multi-racial country which does well till now.

Countries which closely resemble our ethnic demographics are Sri Lanka and Bosnia Herzegovina, and we know what they went through over the years.

Seriously, it was really not so bad all those years that this country was led by Umno via the Barisan Nasional coalition.

It's perhaps the most important moment for the party after its GE14 defeat.

I'm not an Umno member but I sure do hope the party will get a good new leadership to ensure its survival.

That's because I appreciate what the party had done for the country and especially the Malays.

I sincerely wish the party will not die and I will pray for it to be able to survive its current troubles.