A month after defeat, the only people who could save Umno

It has been a month today since Umno and its BN allies were defeated in GE14.

Initially I thought there will be changes in Umno for the better.

After all, it all depends on that Malay party for BN to bounce back from that defeat.

Unfortunately, now, I'm back being pessimistic about it.

The hope for at least BN being a good opposition and an alternative to PH had gradually went into the longkang.

Umno still seems to be its old self.

That's what I concluded after talking with quite a number of Umno leaders ever since their defeat.

Their general attitude is still the same.

Blame it on everything and everyone except for themselves.

The same goes with the other party operatives.

As for the candidates offering themselves for the party election later this month, most are the usual jokers.

For now, of those vying for high office, only a handful could be considered as okay.

Personally, I'm only okay with these;

I think the others should just retire or in case of some, better just jump into the river.

But that's just me, okay.

There's still a week before the nomination period closes.

Hopefully, there will be  better candidates coming forward to offer themselves to revive the party.

Otherwise it would be another long five years of suffering and misery for the ordinary party members who mostly crave for change.

Hopefully, members who will be entrusted to vote for the new leadership will have better options and could steel themselves to reject the temptation of succumbing to the usual money politics.

I know that money has been distributed at this point and more was promised later.

At this moment, I have no expectations whatsoever for the division chiefs and those above them in the hierarchy to save the party.

It's now all up to the ordinary members whether Umno could be revived or continues to slide into the drain.

They are the ones who could save the party. Not their leaders.

If they too are the same as the jokers who lead them now, then that's the end of it.

They have to vote as many good leaders (or at least relatively good ones) as possible into office to affect the much desired changes. 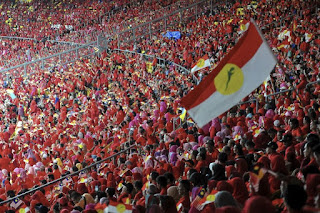 You all got no one else to do it for you.

Get rid of those who caused so many Malaysians to hate your party.

The crude, the rude, the arrogant, the stupid, the corrupt.....get rid of all of them.

You all know who they are.

It's your choice now.