The so unnecessary nonsense (updated)

Back home near Cyberjaya now.

Still tired, but I think I better write a bit about the rally today to update this post.

As far as I'm concerned, Bersih 5 turned out to be quite an anti-climax.

That took out a lot of spice from the whole thing.

In fact, I think Bersih 5 is a very tame affair compared to the previous rallies.

It's definitely smaller than Bersih 4 last year and almost incident free compared to the chaos of Bersih 3.

The bulk of protesters never even got close to Dataran Merdeka.

Police did a good job at stopping them.

The Bersih crowd also never really tried to defy the police or break through the barricades.

They appeared very docile today compared to the way they behaved in past rallies.

Everyone actually tired of the whole thing and was no longer trying too hard.

The Red Shirts were also a disappointment.

Their turn out was very much smaller than expected and they were docile too.

As if their hearts were not in it.

The only novelty this time was probably the presence of Tun Dr Mahathir Mohamad and his people from Parti Pribumi Bersatu. 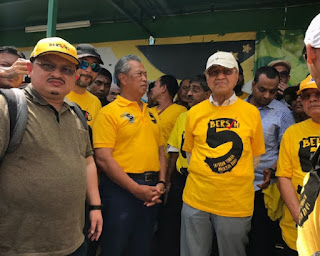 Last year, he was just an observer but this time he's a real participant, complete in yellow tee shirt.

But it's okay lah. There was no violence and Dr Mahathir was never in danger.

No need to whack him.

Not nice to whack an old man, okay.

Another thing I noticed, the Bersih crowd was still very much dominated by members of the Chinese community.

There were more Malays compared to during Bersih 4 last year, but they were still outnumbered by the Chinese participants.

Whatever it is, I'm glad the whole thing didn't turn out too badly.

Hopefully, everyone will from now on campaign peacefully till the next general election.

Then we can decide properly who should manage this country.

So, they arrested Maria, Jamal and others last night.

A little too late if you ask me.

The rally will go on.

I got friends near Dataran Merdeka as I'm writing  this.

They said the crowd are starting to gather.

Mostly from the Bersih side.

I'm now having breakfast in Cheras and writing this using my phone.

Planning to take LRT to down town KL later to observe the situation.

All these were so unnecessary.

If it's during Dr Mahathir's time, the rally leaders would had been arrested much earlier and the whole nonsense could probably be prevented.

But now Dr Mahathir is on the other side.

Well, let's just pray for things not to turn too ugly.
Posted by Annie at 09:27