I'm now in Puchong where my father's immediate family members are gathered for Raya.

Found myself a cosy little corner to write this.

I'm actually the only one in this house not wearing baju Raya.

That's because I have decided not to celebrate the occasion.

I did the obligatory salam and Selamat Hari Raya Maaf Zahir Batin things and that's about it.

I even visited Pizza Hut before coming here because I don't want to eat too much of the ketupat, rendang and such.

What is Raya, anyway?

I don't think it's even mentioned in the Quran.

Did the Prophet Muhammad and Muslims during his time celebrated it like Muslims in Malaysia do?

What I understand is that it's to celebrate the end of Ramadhan where the Muslims congratulate themselves for their success in performing the month-long fasting.

That sounds vain, isn't it? Sorry.

In Malaysia, it's the most celebrated of the Muslims festivities, while in most other countries, it's the Raya Haji, which marks the end of the haj season.

It's more a Malay festival than anything else, if you ask me.

And as with almost everything else which is Malay, the tradition of Hari Raya has most, if not all of its elements borrowed from other cultures.

The most glaring is the practice of giving duit raya, which is a direct copy of CNY's ang pow tradition.

I had previously stated that I refrained from giving out duit raya because for me, it's bad for the Malays.

Money should be earned.

Now you know from where the dedak culture which ended the Malays' political dominance originates from, okay.

Back to the Raya thing, do you all really think there are such things as baju Raya, kuih Raya, lagu Raya, pelita raya, mercun raya, rancangan hiburan Raya etc during Prophet Muhammad's time?

Even if there were such things, do you think Prophet Muhammad would approve of them?

I believe all those were copied from CNY, Deepavali, Christmas and festivities of other cultures and religions.

So, why should I celebrate those traditions, right?

If I want to make a racket with firecrackers in the middle of the night, I'll wait for CNY.

If I want to feeling feeling as if I'm a white person, then I'll wait for Christmas.

That's the thing about the Malays, they tend to just follow what others do....especially the not so good things.

By the way, since Raya the way it's celebrated here is a Malay thing than anything else, I rather not indulge in it.

Since that's the case, I have decided that from now on, I will only celebrate just one festival. 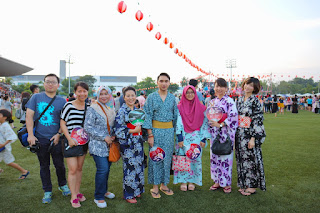 Yup, since Japanese is back in fashion now, I have decided to celebrate only that one.

Bon Odori is next month, actually.

Click on this link to know more about the celebrations here in case you all want to go Japanese crazy too,


Anyway, I previously forgot to provide this link to a proper economic blog for you all to read about the plan to borrow money from Japan


Here We Go Round the Mulberry Bush

excerpts;
First of all there’s the exchange risk – the MYRJPY index has a standard deviation of about 11 points, or in other words, it could move ±20% in any given year: 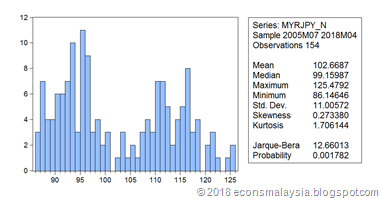 That’s a pretty hefty risk to take on, and fully hedging it exposes the government to considerable loss every year if it gets its FX forecast wrong (which with FX and given the likely tenor of such a loan, is a near certainty).

Leaving that aside, follow the money trail:
The end result:
The same effect could be achieved by the government just issuing lower yielding debt securities to BNM in exchange for new money (which BNM will have to sterilise with it own higher yielding liabilities), but without taking on the FX exchange risk.

In other words, refinancing MYR debt with JPY debt makes no sense at all.

Last point: the irony, for those who are aware of the situation in Japan, is that any Japanese government loan to Malaysia will likely be funded by the Bank of Japan’s own money printing. The BOJ has been engaged in quantitative and qualitative easing (QQE) since Governor Kuroda took over at the BOJ in 2013, aggressively buying up to JPY80 trillion of government securities, or about USD725 billion, every month. Nearly half of Japan’s government debt is currently held by the BOJ.
Well, that's about it.

Okay, okay, some of you may not be happy about what I wrote on Raya here. For you all, here's a Raya song,