I thought I was being quite derhaka when I posted that


But apparently Pribumi Bersatu bloggers are even more garang.

They came out with these;


Another Crisis Brewing : Country Is Not Out Of Danger Yet. Citizens of Malaysia You Must Make A Stand. You Won The Elections. Now Some People Are Trying To Steal Your Victory


Among the issues;
excerpts;


1. Folks I just heard some really worrying news. That fellow is going around the country whispering into the ears of the gullible but influential that Najib was a victim of Tun Dr Mahathir's greed and lust for power.  They are listening to him because he is promising them things that Tun Dr Mahathir will not give them.

2. The same fellow had strongly objected to the appointment of Lim Guan Eng as the Minister of Finance.


3. Someone wants to see the list of suggested Cabinet Ministers and pick and choose who he wants - which is NOT part of our Constitutional process. He wants to veto names that he does not like.

4. Key government appointments must be made like the Attorney General, the Ketua Setiausaha Negara (KSN) and other important Civil Service appointments.  The same person also wants to have  veto power over these appointments as well


5. However the appointment is being objected to on exactly the same grounds - that the candidate is a non Malay and non Muslim.  The candidate for AG  is a Christian.
There is nothing in the Federal Constitution which says that non Malays and non Muslims cannot be appointed as the Attorney General.

So, I guess it's not just me who believe that the rakyat should hold the ultimate power.

By the way, from their posts, I believe the Pribumi Bersatu bloggers were also concerned over the latest activities of Anwar Ibrahim.

Well, I don't blame them.

He was even at the airport when the Indian PM stopped by here to see Dr Mahathir.


ibrahim darus2 June 2018 at 09:57
The Man is at his old tricks again. Lots of money was used to defeat Ghaffar Baba in the DP election of UMNO back then. Going around kissing hands of the Royalty seems to be his present antics instead of kissing the Rakyats' hands.
Sexual exploits has not been reported yet.
So can he succeed this time ? We are all watching whether the originator of money politics in UMNO will practise his expertise again.

I hope Dr Mahathir, despite his age, could handle these nonsense.

It's really scary if he couldn't do so.

I'm sincerely praying that the handsome old man remains healthy and have many more years with us.

Hopefully, Pribumi Bersatu people can persuade him to stay on as PM at least until the end of this term instead of letting it go (to Anwar) as promised in two years time. 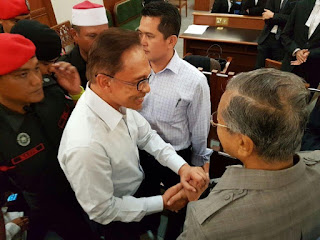 I think, Malaysia being ruled by Anwar is going to be quite a scary place.
Posted by Annie at 17:12