Careful when making promises....and about May 2018

But, as I already said, they should study things first before making promises.

I know it sounds great.

"If you all gives us the power to rule over you all, we will make sure your life will be like in paradise in 100 days".

As PH people like to say about BN, if you started with lying, you will end up stealing.

The same with the one trillion ringgit debt which is not really true;

For that you all can read this;

Meanwhile, Najib continued to act as if he had done nothing wrong when he issued this statement as reported by The Star,


Najib noted that the Pakatan g­overnment recently stated that the shortfall in revenue due to the abolish­ment of the Goods and Services Tax (GST) would be made up by Petronas, Khazanah Nasional and Bank Negara Malaysia, who were asked to provide higher dividend payments to the Government.
However, Najib said this approach was not sustainable.
“Petronas’ profits depend on global oil and gas prices which are out of its control. Over-dependence on high oil prices should be ­avoided,” he added.
Najib also said that the cash reserves of Petronas had increased to RM164.7bil as at March 2018, an increase of RM36.5bil compared to RM128.2bil at the end of 2017.
He said the increase resulted from competitive oil prices and payments received from Aramco Saudi’s investment for the RAPID Pengerang project.
He pointed out that during his administration, he made sure that Petronas did not need to pay dividends beyond its means.
“This has resulted in the cash balance of Petronas increasing significantly and the company has been able to make investments and expand to implement ‘game changer’ projects such as the RAPID Pengerang project, Sarawak Oil and Gas Integration Project (SSIOGP) and the Sabah Ambon and Urea (Samur) project,” he said.
I guess Najib is also aware of the PH people's mantra of blaming everything on him to justify whatever they want or don't want to do including "plundering" Petronas.

A little too late to realise that now, if you ask me.

Actually, I don't want to write too long about this today because I'm a bit tired of being accused of being pro-BN or Umno-paid and things like that.

You all figure it out yourself la that little bit I wrote and pasted above.

I'm taking off for the rest of the day.

Maybe I'll drive to the East Coast again for the weekend later.

Nothing much to do in KL when I'm not working.

By the way, this blog passed the five million pageviews mark yesterday.

Actually that's not very impressive considering that it took five years and while pro-PH blogs are getting tens of millions of pageviews.

But still, I'm glad there are some people who took the trouble to read this blog despite it not being linked to Facebook, Twitter or any other social media platforms because of my aversion to those stuff. 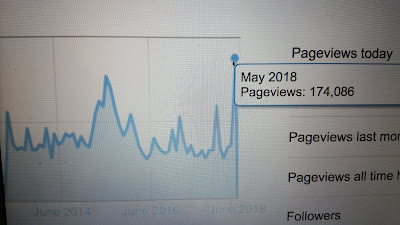 That's during the early months of the Dr Mahathir-Najib fight.

You all can read my postings during that time by clicking on this link,

I actually sounded like a pro-Mahathir blogger at that time, causing a hugely popular pro-BN blogger later on accusing me of being a "Protun" and even paid RM20k per month by DAP.

The attack lasted for over a year. Funny period :)

I actually became neutral around that time.

Didn't have the heart to fight my own friends from both sides.

Fine, I sounded as if I'm leaning quite a bit to the BN side again now but that's actually because they were already defeated and it's more fun to cheer for the underdog.

In a way, I'm actually glad that BN was defeated in GE14. It gives them the opportunity to clean out the garbage while for myself, I felt energised to write on the Malaysian political nonsense again.

Well, if you all want to whack me for that, then go ahead la.

Okay, need to get back to work now.

This My Love is for my beloved whom I miss so much,