Some people got very excited yesterday when police announced that the total value of cash and stuff seized from Najib and his children is about RM1 billion.

They were rejoiced as they believed that Najib and his whole family will surely be thrown in jail soon.

RM1 billion is a lot, okay. So, they are sure more than ever that Najib is guilty of stealing the 1MDB money.

But wait a minute.

Innocent until proven guilty....that pesky basic principle of natural justice which is part of rule of law.

Does the seized stuff and money really came from 1MDB?

They need to prove that in the court first, okay.

And the way the Amar Singh policeman made the RM1 billion announcement yesterday was as if Najib is already guilty, right? 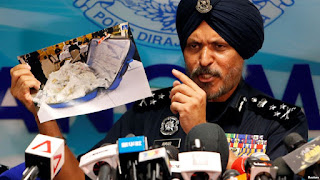 Okay, fine, then go ahead and arrest Najib.

Charge him in court now.

Seriously, I don't really give a shit.

Yea, who cares about evidence, facts of the case and all those legal mumbo jumbo.

Or better still, let us just get rid of the court.

Just judge Najib based on public opinion.....like what we are doing now....like what Kit Siang, Hanipa Maidin and the other suggested.

Still, honestly I hope you all will wait until the court finds Najib guilty of something before lynching him.

Or are we actually just a mindless mob who simply follow where ever the wind is blowing.

Mind you, where are all those advocates of justice and democracy? Say something la.

Last time you all talked so much about all these stuff, what.

Here's Najib statement on the police's RM1 billion estimate of the seizure. He said it during an interview at Malaysiakini office somemore;


“But what I know, over the years as the head of government, we are rewarded with various items by international leaders and personal friends.
“I know it’s not against the law to accept a gift. For example (Prime Minister) Tun Dr Mahathir (Mohamad) admitted that he received 40 horses from friend and he also openly used many of his friends’ corporate jets. So it is not against the law to receive presents,” remarked Najib.

By the way, I do wonder why he went to Malaysiakini instead of NST, BH, TV3, Utusan, etc for this one.

How about all those big time editors who put up nice stories on him there all these years?

They are totally useless now?

Just found out, is it?