It's likely a strategic move...and about being optimistic

I believe it refers to this news;


However, I think it should be read with this story,

out of upcoming Umno party polls

"But if the party grassroots appeal to him to contest one of the top posts and to lead the party, there is a likelihood that he might change his mind about not going for a senior post," a source close to Hishammuddin said. 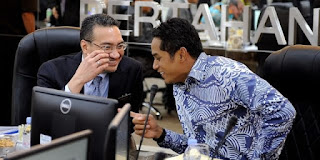 Personally, I think they are the most practical choice to lead the party for now. The best new faces Umno could present to the world if it hopes to revive itself.

I have already made known of this preference of mine in this post;


For now I understand that those two need to be extra careful with what they say.

After all, there are many who are still trying to hang on despite being liabilities to Umno.  They got nowhere else to go.

As for the other top posts of VP, Wanita, Youth and Puteri, I'm praying for all of them to be filled up with fresh faces from among good senior and young leaders.

The same goes for the division chief posts.

Only then Umno could be revived.

All those whose face make people hate Umno must go.

Umno members who are going to vote for their leaders need to realise that they must make the changes if they want their party to survive.

So far there have been indications that many Umno members, despite the GE14 defeat are ready for such changes.

I have been hearing good news about Umno from my home state Johor of late but can't write about those yet.

Must give them time.

Whatever it is, if what I heard from Johor is true, than I can be quite optimistic Umno will be able to revive and be better.

Just arrived in the East Coast.

Have a good weekend guys.
Posted by Annie at 23:36