I think I got so many haters now because I'm not interested to join the PH choir.

Well, what to do.

It has always been hate that got them going over the years.

For them, I'm putting the entire statement by Najib on Guan Eng's TRXC statement as a morning present.

Hopefully they read it to dilute the hate a bit. 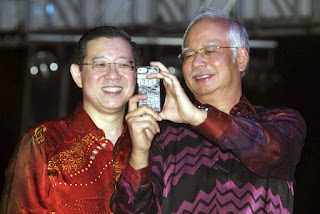 While I am happy that the government has now decided to continue with the Tun Razak Exchange (TRX) project which will bring tens of thousands of new jobs and establish a world-class financial center right here in Kuala Lumpur, I want to point out that Finance Minister Lim Guan Eng has been spreading half truths and outright lies in his statement today about TRX City Sdn Bhd (TRXC), the owner of the 70 acre TRX and 486 acre Bandar Malaysia land and projects.

The take-over of TRXC by MOF Inc for a nominal sum of RM1 effective 31 March 2017, was a key step in the broader 1MDB rationalisation plan. After taking over the two prime assets, MOF Inc then assumed payment of certain 1MDB liabilities from 1 April 2017, in return for the asset transfer.
YB Lim himself admits that even with a further “up to” RM 2.8 billion injection by MOF Inc, the TRX project will be worth at least RM7.8 billion and show a profit.

More importantly, no monies from TRXC were misappropriated by 1MDB. As practiced by many companies, approx RM 3 billion of inter-company loans were made, over time, by TRXC to 1MDB. All these inter-company were repaid by 1MDB effective 31 March 2017, through a combination of cash repayments and a set-off against dividends paid by TRXC to 1MDB.

These repayments were carried out with the approval of MOF Inc and were properly reviewed and signed off by the auditors of TRXC in the 31 March 2017 financial statements.

Since the TRXC was owned 100% by 1MDB which was in-turn, owned 100% by MOF, surely 1MDB cannot be stealing RM3 billion from itself to service its own loan?

Once again, I caution YB Lim Guan Eng against making such factually incorrect statements as part of the PH's political vengeance against me and the previous BN government.

Not only is it unprofessional, it spooks investors in the currency, bond and stock markets. Surely the well being of our economy is much more important than the issuance of politically motivated statements?


For those who don't hate me, here's a song for you,