Should be noted (excerpts);

These issues are the appointment of the AG, the rights of the bumiputras, and the rule of the Council of Rulers as stated under Article 153 of the Federal Constitution.“The King has also expressed his disappointment (dukacita) and worries on media reports of late that were inaccurate and negative in nature, which could threaten the peace and harmony in the nation.“The King has the obligation to uphold the Federal Constitution and preserve the rights of the Malays and bumiputras, as well as to protect Islam,” he added.
So, the King was worried about those things, causing him to hesitate on the appointment.

What changed his mind?

I wonder what Anwar had said to the King that made him felt assured that everything is okay with the issues he was concerned over. 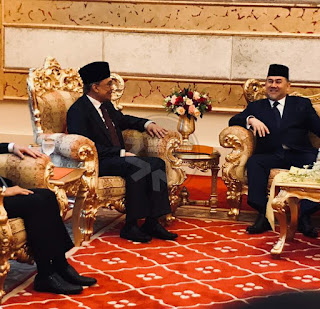 How come Dr Mahathir can't say the same thing to the King?

Well, there were already people who commented here about turning Malaysia into a republic,

In fact, I didn't let through quite a few which were outright seditious.

Well, whatever it is, do note again that Anwar is the one who persuaded the King to back down.

Maybe you all can read again this previous post of mine;

Yup, I was wrong about the royals being on their own.

The royals do have someone to protect them - Anwar.

That's why the King listened to him.

Bear in mind that the King was also assured that he could continue to uphold the Federal Constitution and preserve the rights of the Malays and bumiputras, as well as to protect Islam after the meeting with Anwar.

With this, will the Malays and the royalties unite behind Anwar?

Urghhh...scary thought though.
Posted by Annie at 08:16