About Zakir Naik and bruised ego

How come it's the Information Minister who said this?

Wrong portfolio is it?

Or is it because Gobind is an Indian?

He revealed that Human Resource Minister M. Kulasegaran, Water, Land and Natural Resources Minister Dr Xavier Jayakumar and himself as Indian ministers in the cabinet had spoken about this with the prime minister.

But I thought he's a Sikh.

And that Gerakan man who goaded him into making the statement is also a Sikh, right?

By the way, I thought there are only Malaysians these days...no more Malays, Chinese, Indians etc....I don't know, Guan Eng said he's not Chinese but Malaysian what....

I think there are many confused people in this new Malaysia.

Anyway, the other day Dr Mahathir already made a stand on this issue,


Why then Gobind still wanted to make a noise over it?

In fact, why would anyone still want to talk about it in Cabinet once Dr Mahathir has decided on something?

Isn't that the way it was the last time Dr Mahathir was PM?

I think they better learn from Muhyiddin on this.

Once Dr Mahathir says something, the others should just shut up.

I think that would be better.

After all, Dr Mahathir seems okay with this Zakir Naik fellow, 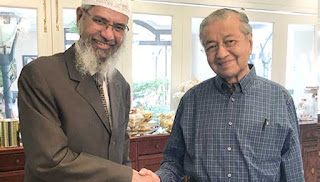 I don't think Dr Mahathir would be nice with the guy if he is indeed a bad person who is going around inciting religious hatred and such.

Who cares about election promises these days la.

Those were just to get votes only.

Anyway, what exactly had this Zakir Naik done which makes some people, especially Indians being so concerned about deporting him?

Or is it because some people went to debate with him on religions and got angry because they were made like fools in public by Zakir Naik, thus the demand for him to be deported?

In fact, I don't like to debate about anything at all.

Normally, I just tell my side of the story and that's about it, and I'm okay if you all disagree with me.

I wouldn't want to debate or argue.

That's because I'm not in the business of educating idiots, okay.

But Zakir Naik is in that business and if you engage him, then you'll get an education.

That's if you engage him to get some education la.

However, if you engage Zakir Naik because of your ego, that is to prove your religion is better than his religion, then you'll get burnt because that guy is good at what he is doing.

I think that's why there are people angry with Zakir Naik and wanted him deported. It's not so much because Zakir Naik was inciting religious hatred but because of their bruised ego.

By the way, I don't think the government will ever deport Zakir Naik.

It's because a lot of Muslims will get angry if they do that.

Zakir Naik is after all a Tokoh Maal Hijrah.

PH can't afford to lose Muslims' support because they are still the majority in the country.
Posted by Annie at 08:29