Happy Anniversary to my Pa and Ma

I took these from Helen Ang's blog at -


Silent anger among Malays is growing

6:30 onwards — Translation from Hokkien
“Is it possible for us to become first class citizens in Malaysia? For 50 years, over a period of 50 years we have been second class citizens, third class citizens, fourth class citizens, aaah. Enough is enough, true or not? So we need to tell Abdullah Badawi, to say to Ong Ka Ting, say to Koh Tsu Koon so that they will know … we want to be first class!”
“Do I have your promise that all of you here will vote for DAP?”
That speech was delivered by DAP sec-gen Lim Guan Eng just a few nights before the general election in 2008.

I wonder whether the Pas and PKR Malays realized what was being said by Guan Eng to the Chinese folks during his campaign rounds.

I wonder how would the Malay supporters of Pakatan in the crowd would had felt if they understand Hokkien and what Guan Eng was saying to the Chinese in the crowd. Would they felt like first class citizens?

Anyway, are the Chinese really second, third and fourth class citizens? Are they being so oppressed in this country? Are they suffering so badly?

I think you all should answer that for yourselves based on your own personal observations.

As for myself, the Chinese are already first class citizen in my family.

My mother runs the show in the house. My father let her have her ways most of the time because he always tries to avoid quarreling with her. It's very much like the Sino-Malay relation in this country.

My mother, despite being totally Chinese educated works for the government and earning almost twice my father's salary. She is a smart, feisty and tenacious lady.

My father, by comparison is a quiet man. But my mother has always told me that he is actually the smartest and funniest guy she had ever met. She said if not for his lack of ambition, my father could have been very successful in his career. "Typical Malays," she would quipped. My father would laugh whenever he overheard her saying that.

Actually, I can write a book about my parents. Their relationship mirrors the history of Malaysia, actually. Love, overcoming differences, acceptance, tolerance, commitments and responsibilities for each others, etc.

Anyway, I do know my parents love each other very much. Maybe my father seems to love my mother more, but that's probably because he is the sentimental Malay type. Whenever he bought her flowers, my mother would scold him for it. Don't waste money, she would told him. But he still continues to buy her flowers, because I think my father knows that deep down inside, despite her fiercely practical Chinese self, she does love receiving those flowers from him.

Pa, Ma, I know you all are not reading this or any other blogs, but still, I'm wishing you all the happiest of anniversary here. 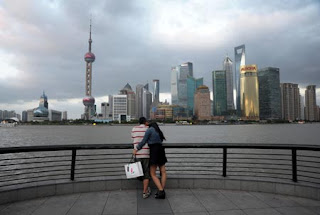 I'm glad the two of you met many years ago and manage to love each other despite your differences. I love you both, very very much.
Posted by Annie at 09:34