When the Sulu gunmen crisis started almost a month ago, I noticed that the conversation among pro-Pakatan colleagues in my office revolved around how the government via the security forces had failed to properly patrol the maritime border in Sabah.

Their complaints then switched to how incompetent the government was via the police when two policemen were killed in a gunfight with the gunmen in Lahad Datu on Saturday which finally triggered the whole bloodshed.

Their derision against the government went a notch higher when six more policemen were killed in an ambush in Semporna.

When the Malaysian security forces launched an all out attack against the Sulu gunmen on Tuesday, my pro-Pakatan colleagues once again switched their criticisms against the government, this time to a different angle by accusing it as failing to act swiftly and firmly against the gunmen from the start of the crisis.

Of course they never mentioned the authorities' attempts at solving the crisis without any bloodshed for the first three weeks. And also of course they never touched on how the Pakatan leaders would likely accuse the government of these and that in case too many lives were lost if such a crisis was to be hurriedly solved by force.

And when the first day of the security forces' offensive ended  with no clear cut results, they immediately jumped on it and cheering that the government had failed and the army, air force, navy and the police were incompetent. They even claimed that the air raid had totally went haywire with bombs dropped on the wrong target etc.

They however went silent when it was announced today that 32 gunmen were slain in separate clashes ever since the operation begins yesterday.

No more complaining....for now, I guess.

That brought the total gunmen killed so far at 52 which include those killed in the earlier clashes. The operation continues as our soldiers and policemen step-up the hunt for the remaining gunmen. 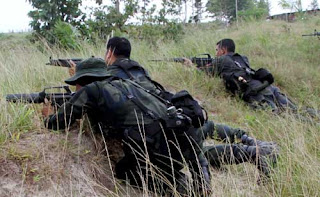 I noticed my pro-Pakatan colleagues' lackluster response when I announced that update of the crisis to everyone in the office today. It was as if they did not want our security forces to be successful as it will bring positive response from the people about the government's handling of the crisis.

Well, maybe they will later on accusse the government of acting inhumanely by rejecting the "ceasefire" and "ending of hostility" offers by the handlers of the Sulu  gunmen based in Manila.

Yea rite....it's too late now to play with words.

After the death of eight policemen killed by them, all deals are off except for their unconditional surrender.

I can already visualize Ambiga of Bersih, Irene Fernandez of Tenaganita and those pro-Pakatan lawyers stylizing themselves as anti-war activists protesting against the government's "disproportionate use of force" against the gunmen.

Deep down inside, I wish the pro-Pakatan Bar Council people will send observers to Lahad Datu the same way they did during the rioting of Bersih to ensure there will be no human rights violation being committed by our security personnel.

The sight of the lawyers in their black suit going into the Sabah wilderness the same way they did during the Bersih riots would be precious.
Posted by Annie at 02:40