Ai, formerly of the BIGCAT blog has agreed to contribute a weekly posting to this blog. She will be writing every Saturday or Sunday starting this week.

Hi guys, hope you all are fine.

For those who don't know me, I used to run my own blog but has given it up due to other commitments. For those who know me, just want you all to know that I'm ok where I am. A bit busy and tired, but ok.

I'm actually writing this just to stop Annie from continuously bugging me to write in her blog. I must also caution you all that I'm far away from home and far removed from what is happening back in Malaysia. So, don't believe 100 per cent what I write here.

Ok, cutting the nonsense short, here is what I want to tell you all,
I had just been reliably informed that Datuk Abdul Ghani Othman will be replaced as Johor Menteri Besar by Umno vice-president Datuk Seri Hishammuddin Hussein before the GE13. Yes, it's been CONFIRMED!

It was learned that Ghani will be removed from his post within the next few days following allegations that he was selling off a portion of Johor to some nefarious local and overseas Chinese, among other things. Oh, he was also alleged of inappropriately selling some fried chicken wings to a balding Chinese boy. Even though the allegations were yet to be proven, the Umno leadership had decided that they can't risk to lose  the support of the rakyat in Johor. The Umno leadership had also decided to show the Johoreans that the party does not tolerate treasonous leader like Ghani, that is if he is really treasonous la.

Hishammuddin, who is currently the Home Minister was said to have been selected as the ideal replacement of Ghani due to the strong and undivided support he enjoys among Umno leaders in Johor. He is expected to contest one of the state constituencies in Semberong in the GE13, where he has an unshakable grassroots support. This will pave the way for his appointment as Johor Menteri Besar. It was also believed that the Umno leadership had decided for Hishammuddin to replace the dastardly Ghani due to his dazzling smile and the solid support he receives from ALL Johor-born bloggers, including myself (former blogger, in my case, I think). 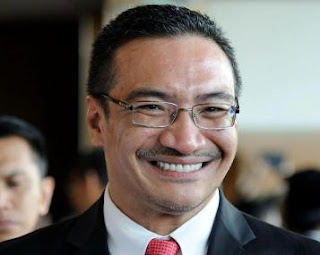 Back to Ghani, the most incriminating evidence of his evilness was said to be contained in the following NST article published on July 15, last year. Well, that's it for Datuk Ghani, I guess. Cheers everyone!


No frills, no fuss but Johor BN delivers

ON THE GROUND: As far as the state BN is concerned, plain hard work is all that's needed for the 13th general election

IT has been 11/2 years since the Tenang by-election and if anyone would care to remember it, they would probably recall the floods which hit the constituency on polling day.
As for political observers, especially those from outside Johor, the most peculiar thing about the by-election would probably be the way Johor Barisan Nasional won it -- it did so with style despite perhaps the most low-profile campaigning ever conducted by the coalition.
Umno's Mohd Azahar Ibrahim, who was the BN candidate, won by an increased majority of 3,707 votes in a constituency comprising 49 per cent Malays, 41 per cent Chinese and 10 per cent Indians and other races.
There were no attempts to create a fun-fair or carnival-like atmosphere by the BN camp during the campaign period while the victory celebrations were replaced by flood relief work.
Iit can be concluded that that is the way of Johor BN -- no frills, just plain hard work.
As the 13th general election looms, Johor BN is once again going about its business in an almost stealthy manner.
Except for the occasional visits by party bigwigs from the federal level, there has been almost no media coverage of the coalition's preparations for the general election.
Those unfamiliar with Johor politics cannot be faulted if they wonder about BN's chances in the southern state as recent reports, especially by pro-opposition news portals, seem to indicate that the ruling coalition is set to lose more electoral seats or even control of the state altogether.
Opposition leaders, especially those from the Chinese-based DAP, had also unabashedly proclaimed that Johor would be theirs this time around.
Their optimism apparently stems from the fact that Johor has a relatively large Chinese community, which is perceived as being hostile towards BN.
Johor BN holds all 26 parliamentary seats except for Bakri, as well as 50 of the 56 state seats.
Unknown to many, Johor BN's preparations for the general election had started in earnest back in 2010 with its chairman, Johor Menteri Besar Datuk Abdul Ghani Othman, visiting each parliamentary area to check on issues which needed to be settled.
The "big issues" involved the people's need for basic infrastructure, such as bridges, roads, religious schools, mosques and community halls.
When the Tenang by-election was held in late January last year, Ghani and his small team of assistants formulated a strategy of utilising grassroots leadership at the "ballot-box level" to spearhead campaigning.
The rationale was that these grassroots leaders know the voters better and therefore, would know how best to win their support for the BN candidate.
The strategy worked brilliantly and when Ghani completed his visits to the parliamentary areas in the middle of last year, he took the cue from that success and went on a second round of visits, this time to the almost 1,000 "ballot-box areas".
These visits, which started in September, were for Ghani to meet grassroots leaders and help them tackle the smaller issues affecting the respective localities, such as land applications, clogged drains, widening of village roads and organising of communal activities.
Ballot-box area committees, comprising grassroots leaders from all BN component parties, were given direct access to the menteri besar's office to improve coordination in their preparations for the general election.

Feedback from these grassroots leaders has so far been encouraging.
Pekan Mersing Kecil ballot-box committee chairman Samsi Sapan said the menteri besar's visits have helped spur party members to work harder.
"If the menteri besar himself can come here and sit down with ordinary people for hours, listening to their smallest problems, such as unkempt grass at the roadside, then we as ordinary party members should work even harder to ensure a bigger BN victory," he said.
Samsi said his committee members were now in the process of engaging all voters in their area and are organising communal activities such as futsal tournaments, karaoke competitions and gotong-royong.
"We are also going around identifying poor residents who need help and arranging their appointments with the relevant agencies such as the Welfare Department."
The opposition in Johor is resorting to their usual ceramah with big names such as Parti Keadilan Rakyat's Datuk Seri Anwar Ibrahim and DAP's Lim Kit Siang as the main attractions.
The issues brought up include the usual -- accusations of BN's alleged corrupt practices and promises of a better administration once they are in power.
Several attempts to stir local issues, however, have not been so successful -- the latest being the mammoth petroleum hub project in Pengerang, which Johor opposition leaders such as Johor PKR chief Datuk Chua Jui Meng had tried to equate with the Lynas rare earth plant project.
The overall scenario as both sides of the political divide in Johor prepare for the general election is similar to the run-up to the Tenang by-election, except that now it is on a larger scale.
Johor BN, without fuss, is working hard while the opposition is trying to shock and awe Johoreans into supporting them by employing their "big guns".
The outcome would be anyone's guess.
ends