Unite, and Johor will prevail

The most crucial thing for Umno now is for its members to be united.

Otherwise, it's the end of them. It's as simple as that.

With the general election certainly to be held next month, Umno need to avoid from being distracted.

Of course things are not 100 per cent perfect for Umno and its allies but if they could manage to hold everything together till polling day, I'm quite sure their target of winning back the two third majority in parliament could be achieved.

As it is, I need to put it on record again that I'm not an Umno member or that of any other political party. My motivation in supporting BN's election efforts is simply to see PM DS Najib Razak winning a convincing mandate from the rakyat so that he may make the necessary changes for the better in the government and Umno.

I'm not claiming to be "berjuang untuk agama, bangsa dan negara". That would be too cliche. Instead, I am just an ordinary Malaysian who want the country to continue along its path which has brought stability and prosperity over the past half a century since Merdeka,

I feel that Najib deserves the chance to affect those changes for the better, especially due to the fact that the alternative PM is either DS Anwar Ibrahim or DS Abdul Hadi Awang. I'm quite sure that Najib could do a better job at anything compared to those two.

From my conversation with friends who are strong supporters of Pakatan, I could sense that they were worried about their chances of defeating BN.

They are starting to talk about how Najib had failed to improve things and that the rakyat are suffering and against him. They also talked about Najib being saddled with alleged personal baggages. Then they started to talk about how Najib should let go off his post, so that his deputy TS Muhyiddin Yassin could takes over in leading Umno to "war".

Of course they know Najib is currently very popular. So, to make themselves feel better, they have to resort to these sorts of talks. And of course, we know that Muhyiddin is a very able deputy of Najib and he will stood by him. Muhyiddin is not the same as a former deputy prime minister who had wanted to stab his boss in the back and assume the PM post through deceit and treachery. Well, I think you all know who that is.

Then, there are all sorts of other weird moves they were making of late, such as fielding the DAP's 72-year-old supremo, Lim Kit Siang in Gelang Patah, Johor.

It was supposed to be the signal for the DAP's invasion of Johor. The irony was that, it was announced last night by Anwar, who was once an Umno deputy president. Johor being an Umno fortress has its gate being opened by a traitor.

Whether the Chinese community of Johor will vote in welcome of Lim's DAP army is yet to be known. What ever it is, a question mark should be, why did they send the old man to do battle in Johor? I'm sure there are other younger and more talented DAP leader who could lead the charge.

How about the genuinely talented and hardworking Johor DAP chief Dr Boo Cheng Hau? Well, just hours before the announcement that Lim is to contest the Gelang Patah seat, Dr Boo's vice chairman Ong Kow Ming, who is also the Senai assemblyman had a press conference where he runs down his boss, accusing him of practicing nepotism and trying to break up the Pakatan coalition with his very public quarrel with Johor PKR chief DS Chua Jui Meng.

The way I see it, Dr Boo was stabbed in the back by his fellow Johor DAP leader to ease the way for the Lim family to dominate Chinese community leadership all the way from Penang in the north to Johor in the south.

It's always the classic case of a traitor causing the collapse of the castle.

Johor Umno and it's allies need to be weary of this as it prepares for the oncoming assault.

They should not allow themselves being distracted from the defense of Johor by petty politickings of people with vested interest.

Any attempt to cause disunity and infighting at this juncture, especially among Johor Umno leaders must be immediately snuffed out and those who instigated them should be treated as traitors. 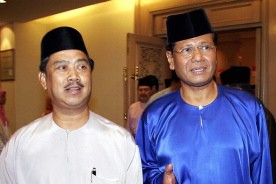 Notwithstanding the challenging nature of defending the State, I am confident that Johor Umno and it's allies will prevail.

One thing for sure, the Johor leadership has always managed to unite in the face of external threats. That is the Johor's trait which has made Umno strong in the State. In all likelihood, that will not change any time soon.
Posted by Annie at 07:05