I don't know why NST didn't put this story on its website, as I think it's a good story. It was published on the newspaper's page 21 of the central edition today.

I'm taking the pain of writing it down here from the NST copy in front of me to prove to the ultras out there that Chinese school students are also patriotic.

Touched by the sacrifices of security personnel in Sabah, Chong Jin Hui, a Year Six pupil of Sekolah Jenis Kebangsaan (C) Chung Hua here, donated RM180 she had saved for a class trip planned before the year end.

The youngest of four siblings, Chong was moved by news reports of policemen and soldiers who had died while in battle with Sulu terrorists in the east of Sabah.

Together with 900 of her schoolmates, teachers and school staff, they managed to collect RM5,448.50 for the Tabung Wira Lahad Datu Media Prima.

"I will forever feel grateful to our security personnel there.
"I want to help the families of those who had died protecting our country.
"Now is the time for us as citizens, to give our support," said Chong, whose parents own a sundry shop in Rawang.

She added that her father also told her that she could donate the money she received during the Chinese New Year festival.

"My father said it is our duty to help the families of security personnel who died in the clashes there."

The school's board of governors chairman Chong Khin Sang said there was also a similar donation drive at Chung Hua High School.

A total of RM12,000 was collected from the students, school staff, teachers, and parents yesterday.

Chung Hua High School assistant head prefect Christopher Lim, 18  said the students had gone all out to collect the donations.

"The Sulu terrorists do not respect our country's sovereignty.
"What they did is despicable and irresponsible," said Lim, adding that he was inspired by the incident and wanted to become a soldier.

Note: I can't find a photo of Chong Jin Hui or Christopher Lim in the net to go with this story. The best I could find is this photo of a Chung Hua Seremban teacher with her students, and what she wrote about her experience at http://www.ch2013.com/articles/teachers/adibah-musa/ 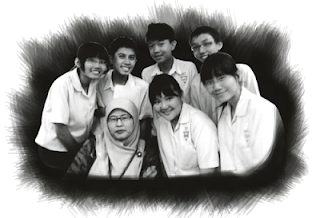