Dissolution of parliament and getting it over

Just told by a relatively reliable source that the parliament will be dissolved either at the end of this week on sometime next week. Election should then be as early as end of this month or early next month. 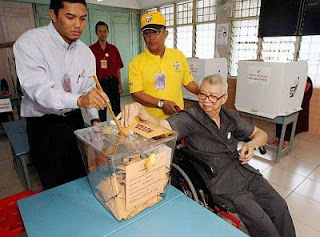 Everyone, has been waiting for it since I think...forever. I had actually predicted it to be in February last year. It was not. The predictions kept on coming but all turned out to be false.

Now, it's almost certainly here, I feel a sense of anti-climax. Honestly, the long wait had bored me of the subject. I just want us to get on and over with it.

Sick and tired of the filth being thrown around these past four or five years. Come on la, how much could we take on, for instance, the Anwar's alleged homosexual escapades. It's too much of a sickening drama.

The latest episode of Saiful Bukhari's father making a U turn against his son was a real turn off. A son claimed he was buggered by someone, an absent father coming around all loving and caring supporting the son, things quite down and the father couldn't get any financial benefit from the whole thing, unhappy father went to the other side to make some profit by claiming son's Quranic oath being a lie....it's simply sickening. Aren't this country's political players have any decency left in themselves?

Heard that immoral father of Saiful is having another Press conference at the PKR HQ today. Honestly, I don't even care to know what he is going to say. Why bother? Later in the day Saiful is going to rebut his father, is it? What a bore it's all have been.

Oh, and then there were the DAP Perak fight between Kulasegaran and the cousins of Nga and Ngeh. Just when we thought we can get something spicy, the DAP as usual slammed the lid on it by gagging everyone. The story then just hanged there without an outcome. So much for freedom of information.

Actually, I am not sure how we, the Malaysian public managed to endure all these since the last general election. Aren't you all, like me, tired of all the bullshit and want to quickly get over and done with?

I think I rather be focused on what's happening in Sabah for the next few days. Now, that's the real perjuangan worth our attention.  Our security personnel laying down their lives in the defense of the country. No cheap tricks or political gimmicks tolerated as evident in the Tian Chua's uncouth remark.

Hopefully the crisis will be resolved before the announcement on the dissolution of the Parliament. Then we can get on with the whole thing with less worry and after that move on with our lives.
Posted by Annie at 10:26