I'm at the moment in a hotel room. It's an outstation work I'm doing for the past and coming few days.

Having some chocolate and tea as I'm writing this. Winding down for the night.

I left the TV on without watching it. Just need the presence of some noise. I hate staying in a quiet hotel room. The show on it was a movie titled "Act of Valour".

Actually I have seen the movie before this. It's a US propaganda film about a bunch of indestructible American special forces heroes who shot dead terrorists and drug dealers all over the world as if they were mere ten pins. It also features all those American super sophisticated hardware. For instance the bullet proof vests those Americans wore could stop multiple hits from an AK47 and even a rocket propelled grenade. The main bad guy in the movie is a Russian Muslim convert who fought on the side of the Chechens during the Chechnya's War of Independence. In the movie, this bad guy recruited a bunch of Muslims from southern Philippines to be suicide bombers and tried to smuggle them into the USA so that they may wrought havoc there.

Of course the American heroes shot dead every single  one of those supposedly Muslim terrorists....as always. It is after all an American propaganda movie, so, no one should expect otherwise.

Nonetheless, notwithstanding my personal preferences, I do consider the movie as an effective tool for instilling patriotism and confidence among the Americans. Anyone who mess with them will be annihilated. That message is clear. It also projected the image that the Americans are cool and invincible.

Well, maybe we should not too long from now consider making such a movie about our own heroes who fought the  Sulu intruders in Lahat Datu. Maybe it could explore the subject matter even deeper and all the way to the existence of Malaysian traitors who struck a deal with the Sulu gunmen or even finance their incursion to instill a sense of insecurity in this country with the general election being just around the corner.

I think Malaysian audience would love to watch such a movie.

But, please get a good producer, director and team of actors to do it. Definitely should not be Yusuf Haslam of the Gerak Khas fame.

On the side of that, I think it is good that our government is planning to bolster our defense. Here is the story (note: please bear in mind that I don't agree with the election prediction in this story) -

"We've made the shortlist," Zahid said on the sidelines of the Langkawi International Maritime and Aerospace Exhibition. "We don't know the cost yet."


Industry sources said the purchase could run into billions of dollars. The deal will help modernise the air power of the Southeast Asian nation, which is in dispute with China over parts of the South China Sea and with militants from the southern Philippines over its far eastern state of Sabah.


A decision on the fighters is only expected after the country holds elections, which Prime Minister Najib Razak has to call by the end of April. His Barisan Nasional coalition is predicted to win narrowly in a tight contest.


All five manufacturers were represented at the Langkawi airshow. Four manufacturers told Reuters they would be able to deliver aircraft to meet Malaysia's requirements, while officials from Sukhoi were not immediately available for comment.


Mark Kane, managing director of the Combat Air division at BAE Systems, which is one of the manufacturers of the Typhoon, confirmed that the company has had informal talks with the Malaysian government.


"Of course there isn't going to be a great deal of movement before the elections," he added, speaking at a briefing also attended by British Defence Equipment Minister Philip Dunne.


The Eurofighter Typhoon is on prominent display at the entrance of the exhibition.


Dassault meanwhile said in a statement that it is ready to develop long-term business ties with Malaysia in major civil and military aviation programmes.


On Tuesday, SAAB signed an agreement for industrial cooperation with Malaysian conglomerate DRB-HICOM Berhad with a view to including the firm in the global supply chain for the Gripen aircraft.
And Michael Gibbons, Boeing's vice-president for the Super Hornet programme, told Reuters: "No doubt about it, we're looking at industrial participation for Malaysian companies."

I prefer Malaysia to purchase more of those Su-30MKM. 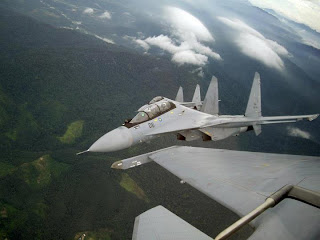 The ones we have now seem to be very good. And I believe they are comparatively cheaper than the others shortlisted by the Defense Ministry.

But then again, I'm not an expert in these sorts of things. So, let our defense people decide on this. Whatever it is, the deals must be done as transparently as possible without revealing too much of our defense secrets.

Yes Zahid, that part about not revealing too much was meant for you...

Other than that, I also hope that our security forces, including the police will be allowed to upgrade their capabilities, especially in fighting threats such as the Sulu intruders. This include providing better weapons, intelligence capabilities, and training for our security personnels.
Posted by Annie at 00:57