This is another posting by Ai for this weekend.

Last week there was a series of photos from a video recording of a gay couple in action being circulated in the cyberspace.

The only one that piqued my interest was this one -

I was like, what in the world was that chubby boy doing smelling the armpit of his male lover.

So, I did my usual lazy research at Wikipedia and found this -

Armpit fetishism (also known as maschalagnia) is a partialism in which an individual is sexually attracted to armpits.[1]
The attraction is mostly directed towards the strong pungent odor of the armpit. The odor of the armpit is the most powerful in the body, sufficiently powerful to act as a muscular stimulant even in the absence of any direct sexual association.[2] Those who have a fetish for armpits often enjoy kissing, tasting, smelling their partner's armpits during sexual foreplay. Sometimes they would require their partners not to shower or wash their armpits, which would cause the smell to become stronger than it normally is.


Well, that apparently what it was all about. Disgusting la, but heck, there is no accounting of taste. Macam-macam ada.

As for the identity of the couple....I think you all should decide for yourself. 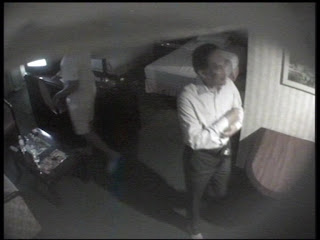 Ok, that's all for this time. I need to go check on someone at the hospital now. Have a nice Sunday everyone. Cheers.
Posted by Annie at 11:10