Pakatan should call for RCI to investigate Sulu incursion

As our security forces continue to hunt down the Sulu gunmen in Sabah, I do feel sad that the crisis had boiled down to this. The loss of lives especially among our policemen was truly unfortunate.

The whole thing seems so unnecessary and pointless. What do these Sulu gunmen actually hope to achieve is beyond my imagination.

If they are really rationale, they should know that there will be no way they could get Sabah to be part of their "Sultanate". Their chances of winning that is even more remote than the chances of them winning independence for their homeland islands in southern Philippines from the Manila administration.

What were their motivations? There was a story that, they had been promised something by opposition leader DS Anwar Ibrahim to create some sorts of commotion which could shift support of especially Sabahans to the Pakatan coalition. But that story, which was started by a Reuters' report, quoting an article by a Philippines newspaper had not been confirmed.

Then there is this picture of a meeting between Anwar and Nur Misuari of Moro National Liberation Front (MNLF), purportedly taken not so long ago before the incursion by the Sulu gunmen who are known to be allied with MNLF. 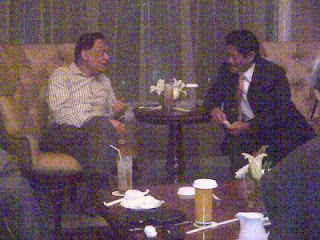 Some may argue that it was an old picture, but the question is - Why did the Anwar's detractors  choose that particular picture to link the man to the crisis in Sabah and if it was not during a recent meeting, then when did it took place and what were being discussed? Anyway, Anwar looks like his current self in the picture.

Maybe the answer could be found by a Royal Commission of Inquiry which if set up, is to be specifically tasked to investigate the cause of the crisis and finding ways to prevent it from recurring.

I wonder if the opposition parties, led by Anwar will call for such an RCI, similar to those which they had eagerly called for in so many other issues. Or would they be afraid that the truth be revealed with an outcome not favorable for their leaders, especially Anwar .
Posted by Annie at 12:42