Kit Siang should contest against Shahrir in mixed JB

There has been claims that the younger generation Malaysians do not care anymore about their racial heritage.

That they do not vote along racial line.

But the facts on the ground disagree with that.

Even during the Pakatan rallies, the so-called multi-racial crowd tends to be segregated along racial lines. The Malays walks with the Malays while the Chinese walks with the Chinese. Of course there were exceptions, but they are definitely the insignificant minority.

Of course you could find the more racially mixed crowd in Bangsar and other middle class part of neighborhoods, but it's not so in other segment of society. That is a fact.

There is no such thing as a single Malaysian race and there is not a single political party in this country which does not rely on racial appeal to win support.

The two strongest parties at the opposite end of the political spectrum are for all intent and purposes race-based.

The openly Malay Umno at one end and the Chinese DAP masquerading as a multi-racial entity at the other end.

It's the way of this country since its independence.

The thing that gels us together was that super moderate attitude. We reject extremism, either it be racial or religious. The Malays generally reject the Malay extremists while the Chinese reject the Chinese extremists.

BN rules the country since Merdeka because of the moderate attitude of its component parties. It is normal for a traditional Chinese candidate of MCA to win against a Malay opposition candidate in a Malay majority constituency.

It's not so for DAP. If it wants to field a candidate in a Malay majority constituency for multi-racial gimmick, they have to field a token Malay. This will be the case in Tenggaroh, Mersing in the coming GE13. It will be a Malay DAP candidate against an MIC candidate. Again, DAP is relying on the racial identity of its candidate to win in the  overwhelmingly Malay State constituency.

Wouldn't it be more heroic for Kit Siang to contest against the incumbent Umno veteran MP of Johor Baru Shahrir Samad in that more mixed area than against an obscure MCA candidate in the Chinese majority Gelang Patah? 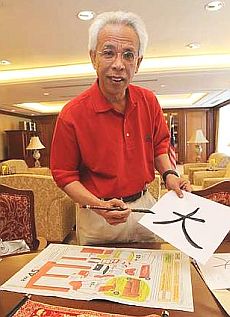 Didn't Shahrir at one point said he is ready if Kit Siang is to contest in JB? I think he said something to that effect not that long ago.

Well, of course Kit Siang would not want to face Shahrir, even if the fight is not at an outright Malay majority area. Kit Siang needs an outright Chinese majority to ensure victory. His calculation was probably that just over 40 per cent of Chinese in JB parliament constituency would not be good enough to defeat Umno's Shahrir.

With that in mind, despite being branded as a racist party by opposition leaders and their cybertroopers, Umno has proven itself ready to accommodate its Chinese and Indian allies by giving them the opportunity to contest in Malay majority areas. Umno people even work hard to ensure the victory of those non-Malay candidates.

So, to those who keep saying that we don't care about our racial identity anymore when it comes to politics, I think you all better get real. Stop fooling yourself and others. Malaysian politics has and will always be racial....at least it will be so during our lifetimes.
Posted by Annie at 19:11