Remembering how Pakatan treated our police

I think even the most staunch supporters of Pakatan have now realize that their side is not going to win the coming GE13.

It's just that they don't want to say it out aloud.

Deep down inside, they know that they can't improve from their 2008 gains.

With PKR and DAP openly quarreling over coveted Chinese majority constituencies such as what's happening in frontline state of Johor, Pas losing huge chunk of credibility among the Muslim electorates over the "Allah" issue, Pakatan's PM candidate DS Anwar Ibrahim bogged down by multiple scandals, and a host of other damaging issues, everyone should know that BN will win.

The only question now is how much BN is going to win.

Whether they like it or not, Pakatan have to admit, their only sure bet for support at the moment will come from the Chinese community. My sources said it's between 70 and 80 per cent.

But that would mean only the Chinese-based DAP will benefit from the Pakatan collaboration while Pas and PKR will suffer for it.

My sources told me that Pakatan's support among Malays/bumiputera is only between 15 and 25 per cent while among Indians between 30 and 40 per cent.

Bear in mind that the Chinese community which was said to be mostly supportive of Pakatan made up about 30 per cent of the voters while the combined Malay/Bumiputera and Indian communities which are more inclined towards BN made up the rest 70 per cent.

Mathematically, according to those estimates, BN will win.

And those estimates were made before the Lahad Datu Sulu gunmen crisis which has made many to sit up and look around at the peace and prosperity we are enjoying and taking for granted.

Now, we know how fragile all those luxuries are and how those who secure peace for us are not really the "anjing kerajaan" and in cahoot with Umno and BN to suppress the people as accused by Pakatan.

Those much vilified policemen are actually our saviors who sacrifice their lives so that we can enjoy our lives as the privileged Malaysians. 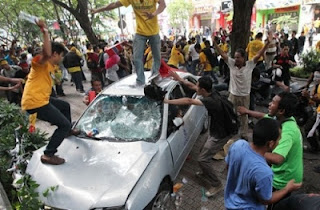 
It's by pro-Pakatan Malaysiakini. And the bitch cursing the police and instigating the crowd to overturn the police patrol car is the person holding the camera. In case anyone forgot, the policeman in the car and an innocent bystander who was trying to help him was beaten up by the mob right before the patrol car was overturned. Prior to that the mob had attacked the car causing it to went out of control.

There are actually so many of such videos condemning our police made by the Pakatan people in Youtube.

Now that we know from what is happening in Lahad Datu that those much maligned policemen actually lay down their lives for our safety, would we still want to vote those Pakatan ingrates to power?