A good movie for a not so bad evening

Got a call from a guy this afternoon, proposing for a dinner and movie.

Free dinner and movie....why not, I thought.

I know the guy is nice and was trying to woo me, but I was honestly not interested in such things. But still, it was a kind offer and I got nothing better to do on Saturday night.

So, there I was, knocking off a bit early from my work at the office and drove to the popular Fatty Crab restaurant in PJ.

The guy was late, so I had to get the table and ordered first. Crabs for two, sliced toast bread, fried rice, chicken wings, century eggs, hot chinese tea.

The guy was all very apologetic about being late but I told him that it was okay. For a bit of punishment though, I told him to buy me some roasted chestnut from a nearby stall which he did. He is really a nice guy.

The dinner was fine except that the crabs were not as nice as usual. Maybe they were overcooked.

Throughout the meal, the guy was hinting at me that he likes me very much but I think he chose a wrong kind of dinner for the occasion. It's hard to be romantic while struggling and hammering to crack open crab shells. Well, not much success for him there. Anyway, really, I'm not interested. To be fair to him, I actually paid for the dinner and told him to just pay for the movie tickets. He was not happy about it but relented.

We then drove off in our respective cars to a shopping mall for the movie.

It's Cloud Atlas starring Tom Hanks and directed by Tom Tykwer and the Wachowski siblings. It's based on a novel by David Mitchell.

The movie was a bit complex but I found it to be really good.  Whatever it is, I think I need a second viewing or read the novel to really absorb the whole thing. I think the message from it is worth the trouble - "An exploration of how the actions of individual lives impact one another in the past, present and future, as one soul is shaped from a killer into a hero, and an act of kindness ripples across centuries to inspire a revolution."

Of the six inter-related stories in the movie, I like the one in Neo Seoul the best. 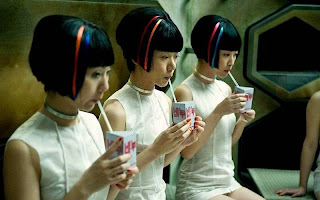