It is almost midnight and I had been searching the net for the latest from Sabah with not much success.

There is probably a blanket black out of immediate news due to security reasons. Affected areas were also totally sealed off from civilians, including journalists.

I called up a friend who is on duty in Lahat Datu and he told me that he is also in the dark as to what is happening since earlier in the afternoon.

All that he knows was that the air raid on the Sulu intruders earlier in the morning had only softened up their resistance a bit but not totally wiped them out. It was said that security personnel moving in to mop up the area had met with fierce resistance. They fortunately suffered no casualty so far.

Rumors nonetheless had it that at least 20 bodies of the intruders had been recovered as security forces combed Kg Tanduo where the gunmen had been entrenched. None of the bodies, if there were any, had been taken out from the combat zone.

I think the operation will lasts several more days as the Sulu gunmen are apparently seasoned fighters who are used to these kind of firefights courtesy of the decades of fighting the Philippines armed forces. 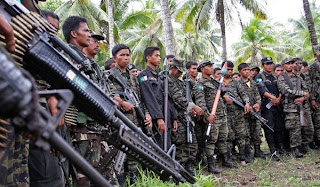 It was said that they were mostly close to, if not actual members, of the Moro National Liberation Front headed by Nur Misuari who according to reports had met with opposition leader DS Anwar Ibrahim just weeks before the incident.

They must had anticipated the assault by the security forces and prepared a fall back strategy. It's a classic guerrilla tactical strategy which enable the smaller but nimble force to hit back bit by bit at their bigger opponent. Based on that, I think  it will take some times to clear up the area.

I'm hoping for our security personnel to take all reasonable measures to minimize their casualty. They should never underestimate the numerically much smaller opponents. It was the mistake which I think costs us the lives of eight brave policemen in the earlier firefights.
Posted by Annie at 00:53