Been years since I last watched the whole of a F1 race. It's just so happened that I was lazing around at home today and the best thing on TV was the race.

I was a big fan of the F1 during the days of Aryton Senna and Alain Prost all the way to the hey days of Mika Hakkinen. 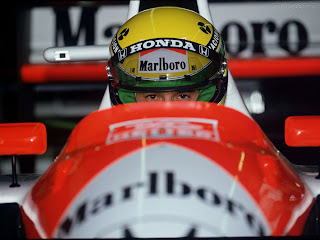 I lost interest though during the long boring spell of Michael Schumacher's dominance.

As I watched the race today, I noticed that I do not know most of the drivers' names. That's how long it has been since I was last interested in the races.

The race today was quite good though, with many overtaking maneuvers but the outcome was rather too predictable to my liking. The fact that it was much decided by team orders was a bit of a let down too.

Reigning champion of Red Bull Sebastian Vattel won the race ahead of his visibly unhappy teammate Mark Webber in second. Mercedes Petronas' Lewis Hamilton was third courtesy of team order at the expense of his team mate Nico Rosberg.

I was actually rooting for Rosberg to overtake Hamilton and chase after the two Red Bulls. But it was not so as the German was frustrated by instruction from the paddock that he had to tail the fuel conserving Hamilton till end of the race.

Despite all that, the F1 race is good for Malaysia. Entering it's 14th year, the races in Sepang placed Malaysia on the world map and bring in good returns in tourism numbers and inflow of income. It's one of those things that Malaysia managed to be ahead of the usually more illustrious in money making neighbor, Singapore.

Bringing the race to Malaysia was the brain child of former prime minister Tun Dr Mahathir Mohamad. It was initially criticized by the opposition as one of his extravagant ego trip projects. But over the years, as it became obvious that the races are good for the country, the criticisms died a natural death.

I wonder if DS Anwar Ibrahim, as the probable prime minister in the event Pakatan wins the next general election will do the same at next year's race.

Or will Pakatan scrapped the race as part of their promise to erase the legacy of BN and its leaders such as Dr Mahathir?
Posted by Annie at 18:51